An open letter to my fellow U.S. citizens

I'm sitting in the dark house on a pre-dawn Saturday morning, sipping my coffee and watching Newcastle United look like boys against men in Liverpool, but - seeing how piss-poor the Lads are playing - I'm also parsing my Facebook feed and reading comments about the ill-advised recruiting stunt the Portland MEPs guys and the Thorns Front Office pulled last Wednesday (you can read about it here).

One of the comments is from another GI who talks about how emotional an occasion it is to swear to defend the people of the United States.

And it occurs to me that the Oath of Enlistment says nothing about "defending the people".

The exact wording is: "...support and defend the Constitution of the United States against all enemies, foreign and domestic..."

That would be..."the people" sometimes, right?

Which is why past presidents have used us GIs to do things like shoot and kill striking workers, and ol' Dugout Doug MacArthur could use us to attack the Bonus Army of our fellow GIs and their families. If the Constitution in the form of the president or Congress tells us that some portion of We the People are a "domestic enemy"?

We as soldiers are obligated by that oath to use whatever means we are ordered to use to "defend the Constitution".

Think about that next time you see one of those "Land of the Free Because of the Brave" bumper stickers, hmmm..?

As GIs you, my fellow citizens, give us a lot of tongue-bathing. You're constantly told to "support the troops". You get a crap-ton of military PR shoved at you, like the recruiting stunt at the Thorns match. And in general that's lovely. We all like to get some love.

But maybe - just maybe - as "citizens" you might want to be a trifle less credulous about all this "support the troops" stuff.

Because it usually takes troops to make "citizens" into "subjects".

Maybe I'm just being a cynical old sergeant. Sergeants are notorious pessimists, the Eeyores of the Army. We always look for the flaws in the officers' plans so we can head them off. And I'm certainly not telling you that my fellow GIs would agree to do that, or would blindly follow orders to herd you into a camp, or shoot you down when you take to the streets if, say, a President were to refuse to accept the result of an election and not yield his power to his elected sucessor.

But...you might want to think about what you're being told. 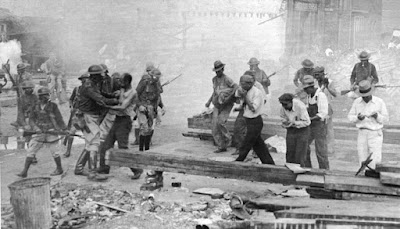