Yakla. Arabic for Dieppe, or Normandy, or neither, or what..?

It will surprise no one here that my general opinion of the not-even-a-month-old reign of His Fraudulency is a mixture of disgust and contempt; disgust for the greedy, mulcting brutality of the Grifter-in-Chief and contempt for an "adiminstration" that is barely capable of incompetence, let alone anything approaching a grasp of the actual complexity and difficulty of running an immense industrial nation.

But...since this is supposed to be a blog about military affairs and geopolitics...let me concentrate on one specific issue involving one single episode in this farcical miniseries and what is says, not just about the Barely Sentient Administration but about the whole business we've been doing in the Middle East since 2001; the raid on the village of Yakla in Yemen.

And the issue is this: "winning" 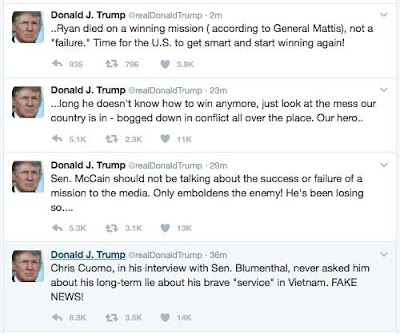 Specifically, the new President seems to be furiously irked that anyone questions that this particular operation was a "win" for the Forces of Goodness and Peace (i.e., the United States, by definition the Good Guys, amirite..?)

"...a winning mission..." is the exact phrase that the Tangerine Toddler Twitterblurted out (attributing it to his SecDef, mind you).

As I noted in the preceding post, first, I have no idea what the actual objective(s) of this raid was or were, and, second, I have no idea whether that objective or objectives was or were achieved. And, indeed, if it was in intel-gathering operation we will probably NEVER know, and rightly so. Whatever intelligence was obtained will be hidden and used to guide future operations, as it should be.

If the intelligence desired was obtained, then, in the strictest sense even a raid that seems to have fallen apart tactically, cost over 100 million dollars as well as dozens of lives - innocent, friendly and enemy - and has provided cause for at least one of the "governments" of Yemen to first revoke and then to request a "review" of U.S. ground operations in their portion of that wretched land can be called a "success".

The entire farrago about this mission "winning" or "failing" just point out to me two problems.

First, and specific to this administration, that Five-Deferment Donnie has no more idea of how actual military operations, campaigns, and wars work than a fucking Jersey cow knows about the proceedings of the Council of Trent. The "winning" nonsense is that's just how a simpleminded derp thinks war works, and the orange Amway salesman has never been closer to combat than the concession line where American Sniper was playing, so that's just how he thinks.

But people like Mattis should know better, and tell him so. I suspect that he did, and that the joker didn't listen, or understand.

Second, and worse, generic to our nation and our foreign policy, that we're even debating about whether some piddly-ass little airmobile raid was a "win" or a "failure" points out the degree that ALL of us; the press, the public, the military and civil authorities in the United States have no real fucking clue what the fuck we are doing in the Middle East.

Because, quite simply, this Yakla raid is part of a much larger, much more complex...something. A "(Sort of) War on (Certain Kinds of People Who Use Certain Kinds of) Terror". A "clash of civilizations". A Great Power cabinet war gone out of control. A...well, I have no fucking idea, actually, and what pisses me off is that I'll bet you and Joe and Molly and Steve Fucking Bannon have no fucking idea, either.

The Yemen raid was something of a tactical mess. But, more importantly, we don't know what our actual goals are in Yemen and whether (or how much) this raid got us closer to them, or not.

In August of 1942 the Brits attacked the French Channel port of Dieppe. The raid was a fiasco, thousands of Allied troops were killed or captured, and the Nazi hierarchy exulted in their success. But the Allies learned a ton from Dieppe, so the next time they came ashore in France it opened the road all the way to the Elbe.

Is this raid Dieppe, or Normandy, or what?

We have no context. We can't possibly know.

And that's a huge problem. If you have no idea what your end-state is (or, worse, if your end-state is something utterly impossible, such as "the utter defeat of radical Islamic terrorism") then how the hell do you know when you've reached it. How do you know whether Operation Yemen Derp, or whatever, has gotten you closer, or further away, or sideways, or where the hell you are? 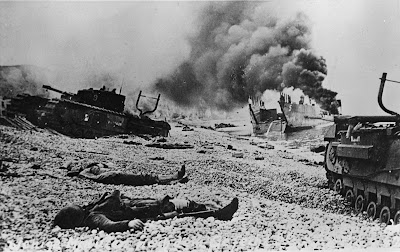 Update 2/28: Per the usually-unnamed "Pentagon officials" it appears that this raid did not manage to acquire any particularly valuable information.

If that is indeed the case, then - given the loss of life and material - it seems fairly reasonable to write this operation off. Whether or not that loss has significantly affected the U.S. interests in Yemen, or whether the U.S. should be considered to even have interests in Yemen, is still nearly impossible to tell given the overall level of secrecy surrounding this war in the shadows.