Possibly the Trumpiest thing yet.

His Fraudulency wants to throw money at the Pentagon by hoovering out the bank accounts at State, the EPA, and other non-kinetic federal agencies.

And when I say "throw" I mean THROW; this projected budget is almost 10% higher than the final Obama Defense budget. We had an increase that big in the early Reagan years, and I might remind you that there was this thing called the "Cold War" back then and we needed to protect ourselves from the bear in the woods, as the kidz say nowadays. The most recent big DoD hikes were back in the early Bush era, when Dubya and Dick wanted new guns to overawe the heathen Afghans and Iraqis and, again, in their last year when they needed to spend some of that money they saved by not rescuing black people in New Orleans or something.

But setting aside OTHER numbnuts Republicans...that's a big sweet slug for the Military-Industrial-Congressional Complex.

Setting aside the ridiculous notion that what the U.S. really needs now is a bigger armed force the really Trumpy piece of this that that the proposed increase - about 50 billion - has no ground in actual delineated military need. There's no "plan" here outside "let's throw cash at the DoD" and we all know how well that works...

Let me throw something near to my heart out as an example. 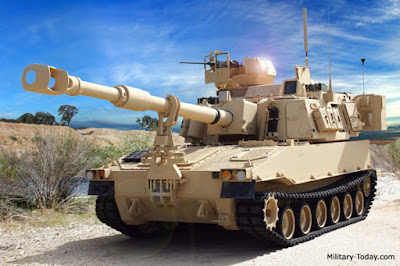 The field artillery branch of the U.S. Army currently employs two primary 155mm gun systems; the M109 "Paladin" series self-propelled howitzer and the M777 towed howitzer. The M777 is a relatively recent design, but the M109 is on the last of a series of upgrades of a system that was designed in the 1960's. While neither is an exceptional design (and by that I mean neither exceptionally good nor bad; they're both fairly middle-of-the-road FA systems) it's worth noting this statistic:

The G5 and G6 gun systems were designed in the Seventies...but they still outrange the most recent U.S. FA systems in all categories of projectiles. 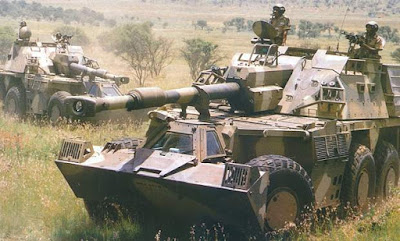 This is not to say that the Army FA is some sort of Third World shitshow. But...the mech and armored divisions have been waiting for a new SP system since the Crusader (XM2001) was cancelled in the early Oughts. So if you wanted to throw some money at the Army the notion that the U.S. might spend some money on upgrading the SP FA system to at least the ability to shoot out as far as an almost-fifty-year-old South African system seems like a not-unreasonable idea.

Who the fuck knows?

After all...this is Trump. The guy seems to make decisions based on who licks him the most like a triple-scoop of butter-brickle. IMO it's entirely likely that some conman shrewder than he is will slip in and sell him on some Ronco potato-gun contraption that works about as well as the infamous "Sergeant York" antiaircraft system...

So it's not just a question of "do we really need to throw more money at guns?" although that's really a good question. The problem with THIS throw-money-at-guns gimmick is that it's no more well-thought-out than the goofy Muslim ban. It seems designed after the way the Coalition Provisional Authority in Iraq usta threw money at stuff; just fly in pallets of dollars and start spreading 'em around.

After all; what could go wrong?

And, worse...to pull this cash from State? Hell, Trump's own SecDef explained the arithmetic of that little transaction to the Congresscritters thusly:

"When Mattis was a four-star Marine general in charge of U.S. Central Command, he told a congressional committee, “If you cut the State Department’s budget, then you need to buy me more bullets.”

More and more it seems like every time these gomers do something it seems like - assuming that they've put any thought into it at all - they've studied the issue and cudgeled their brains as hard as possible to find the answer to the question "How would I do this if I were a fucking moron?"