I'm going to throw this out as a topic for discussion. 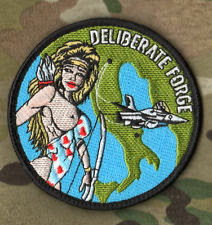 What is the general opinion around this joint about the idea of using the USAF/USN to provide air support for the Iraqi Army?

What I'm talking about isn't some sort of shock-and-awe/bombs-over-Baghdad/Libyan bomb-for-peace sort of air campaign. The sort of thing I'm thinking about is something like Operation Deliberate Force in 1995 only with the Sunni ISIL/ISIS guys in the role of the Bosnian Serbs and the IA as the Croats.

No nonsense about using airpower for some sort of airy-fairy geopolitical sparkle pony magical appearance of happy rainbows and peace unicorns. Straightforward use of aerial munitions to kill people to enable a proxy army to achieve tactical objectives.

Would it solve the clusterfuck that is Iraq?

But these ISIS/ISIL guys seem to be genuine hardcases even by Middle Eastern standards; the precepts of the organization appear to be the need to have a religious war in the muslim world to eliminate the Shia heretics. These guys are, apparently, a sort of Sunni Inquisition only with technicals.

So preventing these guys from establishing any sort of power base in the Tigris region seems worth considering.

This might also enable the U.S. to begin a working relationship with Iran, something that is long overdue given that nation's position as regional power in the Gulf. We don't have to like them, but the present position of the U.S. in the Middle East as a sort of client state of Saudi Arabia seems highly counterproductive, so if air-ground cooperation with their military in Iraq means being able to work with them in the long run? That would seem like a positive side-effect.

I'm not saying this is a good idea. I'm not saying I think the U.S. should do it. I'm saying that I can think of some reasons it might not be a BAD idea and I'm looking for some of the readership to give me their take on it to help me figure out whether it would be on balance a useful tool in the Iraqi box.

Would it fulfill the Geopolitical Prime Directive, "Primum Non Nocere" (First, Do No Harm)? Other than the usual "bombing muslims makes the survivors mad at you" what other possible blowback might there be? Are there any real genuine positive outcomes it might facilitate?

Have at it, ladies and gentlemen.
Posted by FDChief at 10:43 PM