In an utterly shocking, completely-unforeseeable development, the shambolic "government" that United States animated in Iraq, its rent-a-goon Army, and its paramiliary police force are washing away like sand before the incoming tide of angry Sunnis.

What the hell is there to say, really? Other than what I've said over and over again?


"...that sucker was shot in the head eight years ago, when a clown-car full of rage-drunk idiots and cynical thieves tried to sneak into a foreign land and steal it on the cheap, justifying their theft with lies and evasions, muffing the thievery with ignorance and arrogance, and then taking years and years to accept that they couldn't change thousands of years of human history and hundreds of years of poverty, misgovernment, sectarian hatred, and Ottoman incompetence by their pure will alone. The entire mess was doomed from the start, it just took eight years for the fantasists in D.C. to recognize it was walking dead, and the only beneficiaries of its zombie progress since then have been the various outfits that have made millions looting the Occupation and the Malikist strain of Iraqi Shia who now stand to consolidate their kleptocracy with the help of the pals to the northeast.

It's not "over" for the ordinary Iraqi, mind you. The mess that Dubya and Dick created when they knocked over the Baathist toybox in the valley of the Tigris and Euphrates won't be "over" for years, or decades. The social, economic, and political disaster that the idiots who truly believed that they "made their own reality" will haunt the poor bastards that live in that haunted land for generations."

One thing that the usual idiots and the reliable-liars-of-the-Right are saying that makes my jaw drop is that it's time to get our war back on to go shovel this water, again, like somehow it's going to work out any better than it did the last time.

To which I have no better reply than to quote the section of Zee Edgell's work Beka Lamb that pretty much sums up in 131 words what happens to those who have tried to hustle the Valley of the Tigris and Euphrates since the Fall of the Abbasid Caliphate in 1258:

"I know. But nothin' lasts here, Beka. Tings bruk down."

Her Gran leaned the fork carefully against the frying pan, pushed the window over the back stairs and propped it open with a long pole. Then she said:

"I don't know why, Beka. But one time, when I was a young girl like you, a circus come to town. I can't remember where it was from and don't ask me what happened to it afta. The circus had a fluffy polar bear - a ting Belize people never see befo'. It died up at Barracks Green, Beka. The ice factory broke down the second day the circus was here."

Beka's Granny Ivy was crying. Her apron tail was over her face, and she said again and again, 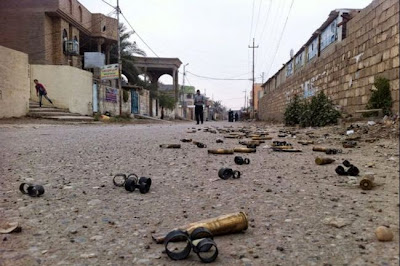