Something appears to be going on in Istanbul. 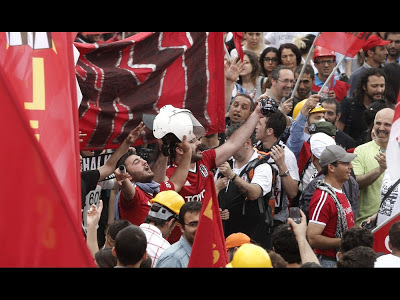 While the original protests do not appear to have had much, if any, political motivation at this moment there appears to be a relatively small but highly vocal series of protests going on against the government of Prime Minister Erdogan and his AK Party.

Why could this be significant?

"Turkey is in a peculiarly important position geopolitically; It controls the Bosporus (exit/entry for Black Sea) and is NATO's access point to the Persian Gulf region (other than from the sea). Sea lanes through Suez Canal/Eastern Mediterranean can be threatened or blocked from Turkey's soil. It's the only almost-Western but Muslim country and could bridge the gap culturally between Europeans and Arabs, being in between both. I should add that the Pan-Turkic ideology (a nationalist party got about 1/8 of the votes in the 2011 elections) could put Turkey into a rival position to Russia in regard to influence in Central Asia (Turkic languages there). The West's encroachment has been stopped in Belarus (as long as the dictatorship doesn't crumble) and Ukraine (where any national election can change the trajectory entirely). Russia would not exactly be happy to face a Turkish challenge on its southern flank."

And, I would add that the intriguing aspect of these protests is the possibility of their bringing the Turkish Army out of its barracks, and I think that a lot will depend on the protesters themselves, the government, and how the Army perceives them both. 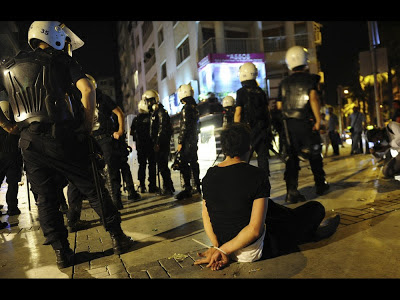 Here, for example, is a post from something called the "Social Action Network" that, I think, may overlook the possibility that the Army may step in if the Erdogan government appears to be in danger.

The author concludes with "This is not yet a revolution, but it is not only tear gas that marks the air in Istanbul. It is also a scent of revolutionary aspirations." without anywhere in the body of the article speculating or even acknowledging what might happen if the Turkish Army decided that the "revolution" threatened the Turkish state with either a leftist rebellion or an government-led Islamic reaction. The Army has a long history - beginning with the Ottoman years and continuing as recently as 1997 - of intervening in Turkish politics when things look sketchy.

The AKP was elected largely due to popular dissatisfaction with the military and the Army has so far respected that. At the same time I cannot believe that the Turkish Army is at all pleased with the openly sectarian policies, the pan-Turkish rhetoric, and the Syrian adventurism of PM Erdogan. 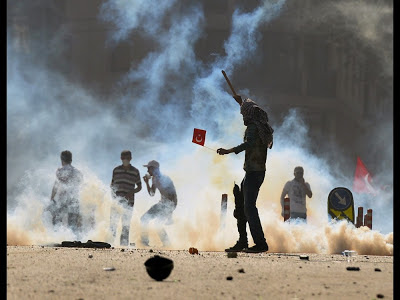 But...in the comments section one of our regulars (thanks, BB!) links to a pretty good summary over at TPM that concludes that at this time the AKP has pretty much destroyed the Army's ability and willingness to intervene in politics. That adds even more uncertainty to what's going on.

One of the big reasons I am peculiarly fascinated by this is the implications it has for the wider Middle East. Turkey and the political career of the AKP was until recently perhaps the only test-case for an "Islamic state lite"; the possibility that a polity with a largely Muslim population could, in the absence of an Islamic Enlightenment and a thoroughgoing rejection of sectarian politics, have an "islamic" party in power without that party using that power to attempt to implement islamic social policies. Much of the recent governing that the protesters are calling despotic centers around attempts by the ruling party to enact conservative islamic shibboleths into public law; restricting things like alcohol sales and advertising and public displays of affection.

If the Turkish islamic party cannot rule without imposing or trying to impose sectarian law on its secular fellow-citizens I think it bodes poorly for everywhere else in the Muslim world where the traditions and practices of nonsectarian government are less entrenched than Turkey. I consider this a big part of this story and I think that this aspect is being poorly covered. I suspect that to a degree this is "urban hipsters who want to go West" versus "rural hicks who like them some religious limits" but I can't get a feel for to WHAT degree.

I also suspect that the U.S. press, assuming that it bothers to cover this much at all, is likely to frame it in the context of the "us versus them" way that it has taken to reporting events from the Middle East, with the islamist AKP taking the "them" part. But that the larger import of potential instability, or military coup, or the potential failure of the "nonsectarian islamist project" in the pivotal nation of Turkey and its role in a fractious part of the world is likely to go unexamined...

Hard to tell at this point if all this will blow over or blow up, but I'd suggest that events in Turkey are well worth keeping an eye on.
Posted by FDChief at 8:27 PM