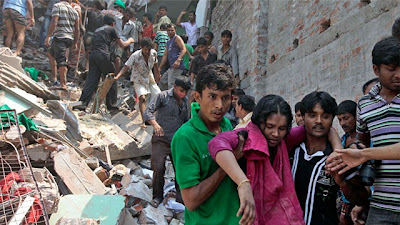 In case you were taking a break from domestic news and wondering who's killing innocent people overseas, well, in Bangladesh it's mostly the people working for Bennetton, the Gap, and J.C. Penney;

"The plan would ditch government inspections, which are infrequent and easily subverted by corruption, and establish an independent inspectorate to oversee all factories in Bangladesh, with powers to shut down unsafe facilities as part of a legally binding contract signed by suppliers, customers and unions. The inspections would be funded by contributions from the companies of up to $500,000 per year.

The proposal was presented at a 2011 meeting in Dhaka attended by more than a dozen of the world's largest clothing brands and retailers — including Wal-Mart, Gap and Swedish clothing giant H&M — but was rejected by the companies because it would be legally binding and costly.

At the time, Wal-Mart's representative told the meeting it was "not financially feasible ... to make such investments," according to minutes of the meeting obtained by The Associated Press."

Well, I, for one, am glad that our corporate "citizens" are not knuckling under to the tyranny of those irresponsible Bengalis who seem to hold the misguided belief that things like workplaces that don't collapse or catch fire are some sort of "right" rather than a privilege of being in a Free Market.

I'd have more to say but there's a terrific sale today down at Wal-Mart, and I have got to pick up a pair of Levis; always low prices there, y'know? 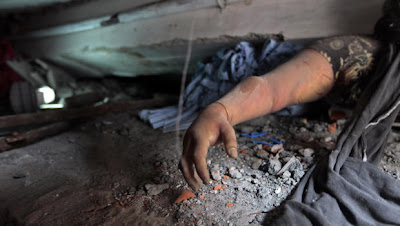