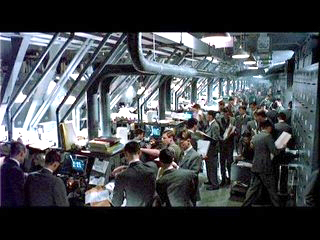 --In "Brazil", the steampunk technocrats
can't keep up with the bombers

Two bombs were detonated at the conclusion of the Boston Marathon 15 April 2013 resulting in 3 deaths and over 100 injuries. The event proves the maxim that to counter a threat we must be right every time, while the terrorists only need to be right once.

Why Boston? Key portal cities will be the only targets of terrorism. Terrorists have limited assets, and these cities offer easy ingress and egress.  Authorities are suggesting this is the work of a lone man, perhaps a Saudi national, but the lone wolf theory does not comport with historical events.

We must assume that any ancillary team members exfiltrated prior to the execution phase. The reason is asset value.  Bomb makers require sophisticated training and are the most valued members of the team; his life cannot be jeopardized in peripheral activities.

His specialty is not reconnaissance, security or any other support function of the planning stage.  Both active and passive support provide these functions, to include materiel gathering for the bomb maker (unless the explosives were provided by a State or non-State sponsor.) The explosives must also be infiltrated, and the maker is not the mule.

The pertinent question regarding whoever executed this attack is: How did they get past Saudi police, intelligence, Interpol, ICE, FBI, CIA and the Boston Police?  Note also that neither the 3rd Armored Division nor Seal Team 6 could have stopped this event, which shows that terrorism is not a military concern.

The  targeting of the Boston Marathon on Patriot's Day is similar to the Irish Republican Army's bombings in London streets during The Troubles. The targeting of a popular sporting event will cause terror beyond the actual destruction. The terrorist's goal is always far-reaching trauma, exceeding that of the physical damage.

A down and dirty review of necessary perpetrators:


The bomber(s) and handler are expendable, and did not build the bomb. They only place and arm the bomb, and ideally will be killed in the explosion leaving no live intel sources behind (though Boston police are stating at this time that the bomber was not among those killed.)

These people are all like Chairman Mao's fishes swimming in a big river. In our little city, there are groups of Middle Eastern men who frequent local coffee shops playing chess, coming and going every few weeks, fading into the background, hiding in plain sight. We are not saying they are threats, but in a free society we have anonymous people coming and going at astounding rates; not being a police state is a double-edged sword.

The Boston bombing shows that despite the U.S. invasions of Iraq or Afghanistan, we have neither sufficiently or correctly identified the threat to the U.S., nor have we eliminated the motivation for attacks by these groups. While we send Special Operations Forces worldwide, a bomber gets through the levels of security cast by our supposed specialists.

Simply: All of the SWAT teams, drones and armored divisions will not protect us from a core of dedicated adversaries.

The question to be answered: From whom do the attackers obtain their operational abilities and support, and why do we fail to focus on the actual threat to our nation?

Most likely these were commercial explosives, as they were in backpacks.  They probably weighed no more than 40 pounds and no shrapnel was incorporated, keeping them light and concealable. This also implies they needed to be placed strategically to employ the surrounding area to act as shrapnel.

This means the bomb-maker knew his craft both technically and tactically.
Posted by rangeragainstwar at 1:15 PM