I have been pondering a "decisive battles" post on the final months of what is known as Eelam War IV, the conclusion of the long conflict between the government of Sri Lanka and the Tamil Tiger rebels. 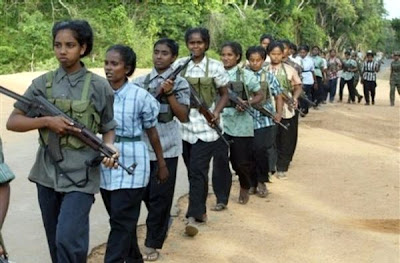 While the conflict itself is horrific, the engagements between the rebels and the Sri Lankan Army (SLA) are potentially of interest to citizens of the nations currently engaged in suppressing rebellions in the Middle East, which as of this writing includes the United States and its allies in Afghanistan and Israel in the occupied territories.

I thought that a look at the tactics and techniques that made the government forces successful and defeated the rebels might be useful for U.S. citizens pondering their own government's course in its wars and its support for the wars of its allies.

What I found was very revealing, but not about military tactics or techniques, but about nightmare and horror. 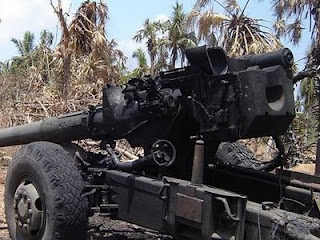 First, in researching Eelam War IV I discovered that the conflict may well be the most poorly documented recent major war outside the Russian campaigns against the Chechen rebels. The government of Sri Lanka did an exceptionally good job of preventing outside observers from getting any but the most haphazard notion of what went on in northern Sri Lanka in late 2008 and 2009.

For example, some sort of engagement at the village of Aanandapuram was fought in late March and early April, 2009. I had hoped to write up this engagement as the "decisive battle" for March 2013, given that it seems to have been the final act of the Tamil rebel forces as a conventional military outfit. But I quickly ran into the realization that providing any sort of militarily sensible account of the events of Aanandapuram was damn near impossible.

For one thing, I couldn't even come up with anything approaching an order of battle for either side. 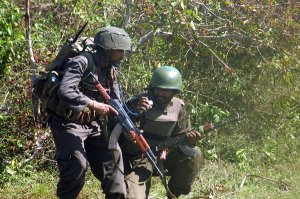 Based on SLA sources we know that this combat included elements of the SLA 58 Division, 53 Division and something called "Task Force 8" (probably composed of SLA Special Operations units). But which of these units were engaged, and where? A Tiger website claims that "(t)he 4th, 6th,8th, 12th, 14th and 20th Gajabahu battalions, 5th Vijayabahu, 9th Gemunu Watch, 11th and 20th SL Light Infantry along with 1 special forces and 2 commando got into action" but offers no explanation of how these units were committed, or where, and what they did there.

SLA sources also tell us that the "Charles Anthony" Infantry Brigade of the Liberation Tigers of Tamil Eelam (LTTE or just "Tamil Tigers") was present, although in what condition or strength is unknown. The same sources mention that a number of senior LTTE leaders were killed there, including the commanders of the Jayanthan Infantry brigade, the Imran-Pandian, Maalathi, Sothia infantry regiments, the Kittu artillery unit, the Kutty Sri mortar unit. Whether these leaders were with their units, and whether these LTTE units still existed effectively as bodies of troops?

We have no idea. 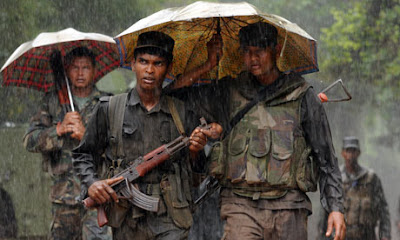 The other side of the hill includes Tiger websites and press releases quoting Tiger-source material. But much of this is as oblique and opaque as the SLA press releases.

In an attempt to find some documentary evidence of the engagement I read The Cage by Gordon Weiss and was not helped. The 2011 work details Weiss' account of the slaughter of Tamil civilians during the last stages of Eelam War IV but has little about the military hows and whys.

And that, in turn, led me back to thinking about the recent fighting in Gaza, and the reality of suppressing rebellions that we here in the West don't like to think about. 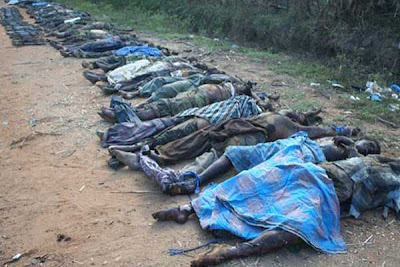 Since 1945 we many of us - civilians and soldiers alike - believe or try to believe that there is a "humane" way of crushing rebellion. That civil wars and rebellion-suppression can be successfully fought along Geneva Convention lines.

We like to believe that there's a "plan" or a "strategy" that can end these rebellions with less bloodshed. Conditioned on our belief in technical means to political, economic, and even military ends, we like to think that if we just hit on the right "strategy" we can bring the rebels in out of the cold, make them sit down with their rivals, "work things out".

This has meant that U.S. policy, as well as the reputations of the U.S. military and its general officers in the recent wars in southwest Asia, largely rests or has rested on the ability to successfully implement "counterinsurgency" plans along these Western lines, which typically feature relative military restraint along with civil "nation building" or "hearts-and-minds" campaigns; call then what you will, the idea is to bring the rebels back into the "government" camp and to "pacify" the rebellious regions without exterminating the inhabitants.

The original example cited for this sort of CI success is typically the 1948-1960 Malayan Emergency. Now and then you get mentions of the British CI efforts in south Yemen, Oman, and Dhofar.

But...when you look hard at those successes you start to realize their "one-off" characteristics.

Malaya was the really special case; a rebel group composed nearly entirely of a racial minority group that then made a series of critical strategic mistakes. In my opinion the attempt to re-create Malaya led to a whole bunch of screw-ups in places like Vietnam; the success of Malaya was due less to the British Hannibals than the MRLA's Varros.

What you do see, looking around, is that the mechanics of suppressing rebellions hasn't changed all that much since Roman times. You kill everything moving and keep killing until they stop moving.

It has worked in Sri Lanka largely because, not in spite, of the fact that the Sri Lankan pledge of "Zero Civilian Casualties" was a sick joke. 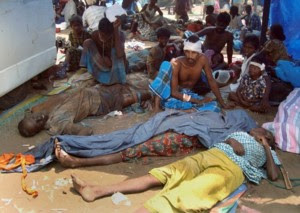 There is a reason that Eelam War IV is so poorly documented; because it was an old-fashioned Roman-sort of civil war. In my opinion the Sri Lankan government and the SLA recognized the legitimacy of the Tamil rebels.

But they had no interest in accommodating those people; they were interested in keeping power for themselves. That meant not "pacifying" the rebel areas; it meant destroying them, destroying the rebels and all their people, in such a way that they would never again think that the chance of victory outweighed the costs of defeat. 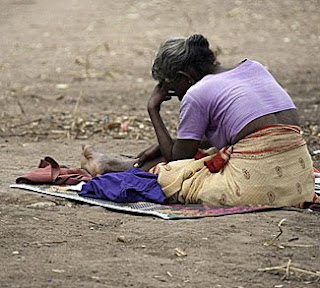 "Shared" power tends to become separate powers over time; ask the Czechs and the Slovaks, the Bosniaks, Serbs, and Croats. The Sinhalese-majority Sri Lankan government had no interest in sharing power with the Tamil minority. It wanted to crush them, and crushing them meant - as it has always meant since Crassus' day - killing them in job lots.

And to kill to that degree meant keeping the press out. Without the cameras and reporters and the other busybodies of the lily-fingered West the SLA could get on with the business of crushing the rebellion with fire and steel.

Is it horrible? Yes. 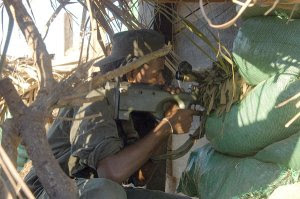 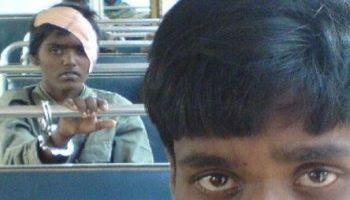 And I know that. And I know that the record of the alternative - the Western hope that good roads and plasma TV will make the angry people happy again - has been iffy at best and disastrous at worst, if you can't change the fundamental problems they are angry about.

I guess that the only "lesson learned" I can come up with from the Battle of Aanandapuram is Tacitus' old lesson written over again in the letters of blood; Auferre, trucidare, rapere, falsis nominibus imperium; atque, ubi solitudinem faciunt, pacem appellant. 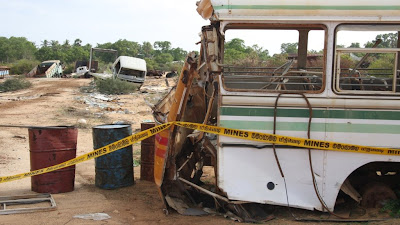 I wish I had a different story to tell. I wish I thought that there was a solution to the problems of Afghanistan or Israel short of endless war or brutal genocide.