"Libya has no army. It has no government. These things exist on paper, but in practice, Libya has yet to recover from the long maelstrom of Qaddafi’s rule. The country’s oil is being pumped again, but there are still no lawmakers, no provincial governors, no unions and almost no police. Streetlights in Tripoli blink red and green and are universally ignored. Residents cart their garbage to Qaddafi’s ruined stronghold, Bab al-Aziziya, and dump it on piles that have grown mountainous, their stench overpowering. Even such basic issues as property ownership are in a state of profound confusion. Qaddafi nationalized much of the private property in Libya starting in 1978, and now the old owners, some of them returning after decades abroad, are clamoring for the apartments and villas and factories that belonged to their grandparents. I met Libyans brandishing faded documents in Turkish and Italian, threatening to take up arms if their ancestral tracts of land were not returned." 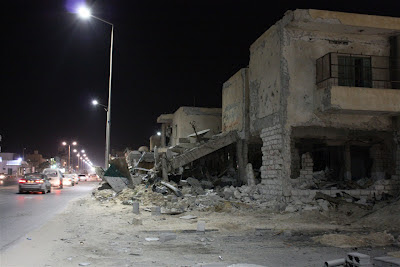 I know this is not news, but; you cannot bomb a place into civilization.

The reason I didn't want my country getting involved in Libya's problems was not because I hate Libyans.

It's because through thirty-odd years of adulthood I have never seen military force "solve" problems.

Weapons can, sometimes, if everyone involved is smart, and cautious, and above all, lucky, kill people who are causing problems and destroy objects that are threatening lives, liberties, or security.

But without some sort of willingness, capability, and the resources to employ both to either rebuild or construct something better than what was killed and destroyed the result is madness:

"We’re the national army, we want to go to the front line.’ They didn’t stay one hour. One of them pissed his pants. They say 35,000 men have joined the national army. I tell you, if all 35,000 came here, they could not get past our 200 men. Until there’s a true government, no one will give up power.”

Because - and the post-civil-war Libya should remind us, again, that military force simply replaces one set of problems with another.

We had a very impassioned debate here back in March a year ago, about our ideas, and ideals, concerning the West's part in the Libyan civil war.

And yet here we are, a year later but largely silent, as Libya devolves into the sort of terrifying half-civilized ruin that sounds more and more like the aftermaths of the other disastrous internal collapses that are Somalia, and Liberia, and Iraq, and Afghanistan, and Chechnya...

And yet...I listen to the rhetoric that occasionally fountains up regarding Iran and think; who ARE these people who seem to think that "more rubble, less trouble"? And why do they not tremble when they look at Libya today?

I did then. Back in March 2011 my summation to seydlitz was:

"1. I think that the U.S., and Obama, will get absolutely zero political or military capital out of this. If it works, it will be treated like Kosovo was, or Gulf II was, and will be overwhelmed by domestic events.

2. I think the rebels will turn out to be more shambolic, less competent, and more vicious that we think. I think Libya will, in the long run, turn out to be the same mess it has been since independence. In other words, I think that all this will mean a cup of warm spit (see above).

3. I think the very best that will come of this is that some people who would have died won't. But that's a very dim prediction, and it might just end up the other way around, if Gaddafi's people turn out to be more tenacious, and the rebels more vituperative, than they look right now."

Well, Gaddafi's people were a little more tenacious but we flattened in the end. But from the linked article above it seems that the rebels are, if not more vituperative, at least as incompetent, shambolic, and vicious as they seemed to me then and still do. 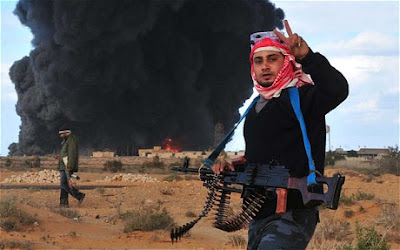