If I had a rocket launcher...

Filed under the heading of "can we have a better effing media" is this article from the LA Times; L.A. gun buyback yields rocket launcher, assault weapons.

"A $2,000 pair of pocket pistols and a military rocket launcher -- sans rocket -- were among the 1,673 firearms that Los Angeles residents traded in for gift cards in the city’s gun buyback this weekend."

reads the first paragraph of this little item.

"Who in the holy hell goes out and buys a freaking rocket launcher? What are you hunting? Traffic helicopters? And then, who in the holy hell turns it in to the cops? Shouldn't this engage the interest of the FBI's crack Set-Up-The-Loonies unit that has been so successful elsewhere?"

and on the face of it, given the newspaper article, his concern seems like a legitimate one.

If this thing was, say, the "launcher" section from an RPG-7, well, that's bad. That really is a "rocket launcher"; you get your hands on the grenade round and you're in business.

But if this thing was - as I suspect it was - the dunnage from an old LAW or an AT-4, well, frankly, that's just a piece of fiberglass pipe. It's expendable, and is somewhere between difficult and impossible to reload. It's issued as a unit, launcher and projectile, and once it's fired the "launcher's" only real use as a weapon is as a bludgeon and not a very effective one, at that.

I will not disagree that the U.S. is pretty freaking ridiculous on who can tote around what weapon and why, but not sure that the whole "rocket launcher" thing here is really the cherry on the top of the self-licking ice cream sundae.

But you'd never know that from this article, and I suspect that there's one of two reasons for that;

First, it's possible that the LAPD did not produce the "rocket launcher" for the reporter, or describe it other than as such. In which case, one would think that the stupid fucking reporter would have asked an actual question, you know, like reporters in movies do, about the exact nature of this weapon.

Or, second, it's possible that the police DID produce the thing, and the reporter stared at it like a cow at the minutes of the Council of Trent, and ambled away as fucking clueless as he was before seeing it.

It's hard to tell which is worse.

But what is telling is that Charlie had a neat little quote from James Madison in his blog the following day:

“Knowledge will forever govern ignorance; and a people who mean to be their own governors must arm themselves with the power which knowledge gives.”

which sums up the utter fuckupitude that this little newspaper article represents.

In our current civilization We the People are asked to make many decisions on issues we have no personal knowledge of, in places we have never visited, and with information perforce supplied by others.

And the only way we can arm ourselves with the power of knowledge on these issues, from wars to traffic law, is through the reportage of others.

But if this article does anything, it shows how a simple question of physical fact - one that could have been clarified with a single, simple question - can be rendered not just completely, utterly useless but actively misleading - "OMFG, there are rocket launchers out there on the streets of LA!!!!" - through the total incompetence and ignorance of one local reporter.

And this is to completely elide the pernicious influence of maliciously deliberate liars of the Glenn Beckian sort.

It remains in me, therefore, no real sense of wonder that we are so thoroughly fucked.

Update 5/24 p.m.: In the Comments section, Andy (one of our most reliable regulars here - the next round's on me, Andy...) does his usual thorough job of fact-finding and tracks this nonsense down further. He finds a photo of this fearsome weapon of mass destruction at the Bakersfield TV station site and notes that it is, as suspected, an inerted training aid - in this case, of a U.S. AT-4. 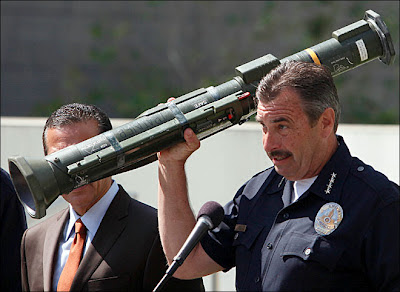 So, no, the streets of LA are not in danger of becoming Beirut or Ramadi, LA Times, as a few simple questions would have established.