Understanding the Human side of the Greek "Crisis" 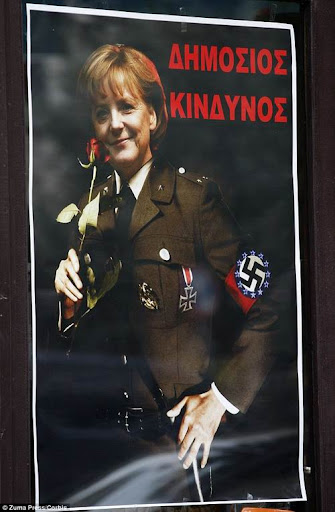 There were some recent articles that can give an insight to the social uproar in Greece. Both focus on the German view of numbers being more important than humans, a major societal difference between the Germans and the "Mediterraneans".

Take the time to read these three. They are enlightening, and not one is written by a Greek!:

1. Germany must decide what the European Union is for

2. Germany Vs. the Rest Of Europe

3. The dark side of Germany's jobs miracle


Germany touts its "low unemployment", and has demanded that Greece, as one step towards recovery, follow the "German model" of lower wages (Germany has no "minimum wage") to "spur competitive productivity". However, German labor policy has created an expanding underclass of working poor. By abolishing the minimum wage and creating new categories of part time employment to "cook the unemployment books", Germany conducts a program of what amounts to massive government subsidy of private enterprise. German employers can pay paupers' wages to be competitive on the world stage, and the government pays "benefits to the poor" to these very workers to make low wages possible. In short, the "welfare" benefits are not a result of serious low wages or unemployment, they promote and support, by policy, low wages. The resulting "competitively" priced goods offered for domestic consumption and, more significantly, export provide the tax revenues to pay the welfare benefits intended to keep the price of these goods "competitive". Since this is technically a "social program", not direct government subsidies to industry, it does not trigger any WTO complaints.

As noted in article 3, the number of so-called "working poor" has grown faster in Germany than in the currency bloc as a whole over the past 10 years or so. This number has grown to the point that while PM Merkel and her Finance Minister are promoting the "German model" for the weaker economies in the EU, they are considering altering German labor law to address the growing population of working poor dependent upon the state for survival, as it is becoming a political (not just economic) liability.

As Andy, in his astute sense of the dangers of "entitlement programs" would note, allowing a totally unregulated labor policy to exist, supported by government payments to the worker, cannot go on indefinitely. A significant portion of Germany's "expanding economy" is a direct result of Berlin using tax dollars to make low wages possible, and since there are no limits on German employers establishing low wage jobs, there are no limits on the social program benefits this will entail. And, as the past 5 years or so have shown, German employers have jumped on the poor pay bandwagon with gusto. But man, it looks good on paper, if you simply look at "unemployment levels" and ignore welfare levels. Also note that there appears to be no escape from the rolls of "working underclass" once one enters that category of worker. Where in the US, we claim to have had a goal of reducing "working poverty", the German system has made it a integral and significant part of their business model.

Back to Greece. Berlin has demanded, as part of the bailout, that Greece dramatically lower minimum wages to spur "competitive pricing", as has been done in Germany. However, at the same time, they are demanding dramatically reduced government spending, particularly on social programs. Greeks are not stupid. If wages are reduced, a la the German model, but not supplemented by social services and payments, a la the German model, human misery will result. And you can't increase, no less maintain, social services and payments with an ever decreasing government budget. Greeks are well aware of the large numbers of German youth seeking summer employment in tourism here, as they can't earn that much at home, where the "employment miracle" is touted.

Couple the simple math of the German demands with some of the ill advised statements of the German Finance Minister, Wolfgang Schäuble, and Greek citizens are up in arms. Schäuble has made statements assuring Portugal, for example, of "flexibility" in their bailout, while demanding rigid adherence from Greece, as well as saying that "protecting banks" was the first priority. His aparent indifference to human suffering has rankled folks here, who know that his "German model of recovery" is pure hogwash. While other German officials have, over the past two years, have made ill advised and demeaning statements, Schäuble has become the lead and continuously visible proponent of a perceived "German superiority" stance. Anyone who has read a bit of history can guess how Greeks, amongst others, might react to any message of "German superiority". One neighbor, who has spoken quite rationally about the current mess, noted that Schäuble speaks more generously and forgivingly towards Ireland, Italy, Spain and Portugal, all of whom face larger debt burdens that pose a greater threat to the EU, but were "either an ally or neutral sympathizer to the Nazis, not an opponent, as was Greece". While I neither agree nor support such a perception, I can understand it. Emotions are running high.

(I would note, parenthetically, that early on in this mess, one German government minister suggested publicly that Greece cede sovereignty of several Greek islands that were popular German holiday destinations to pay off some debt, since "Those Greeks don't make any good use of them for any other purposes anyway". Not an endearing comment by any stretch.)

There is no question that Greece has brought her debt problems on herself. There is also no question that the plodding response by the EU, no less the demand for a phoney application of a "German model" to the current "crisis", has contributed to the worsening of the situation. 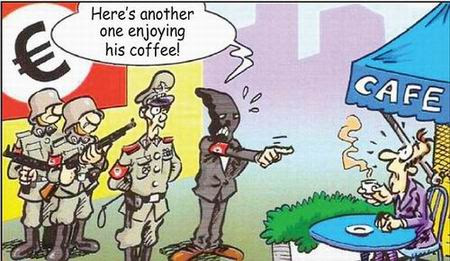 No way in hell am I excusing the rioting in Athens. However, there is also no way in hell the "German model" of recovery, as demanded by Berlin, can result in anything other than long term suffering. The "German employment miracle" is based, in no small measure, on smoke and mirrors, and any close look will find that to be the case. Trying to tackle a situation such as the current Greek governmental debt crisis cannot be done without addressing the human side of the society. Otherwise, the solution to the Greek debt problem could easily bee seen by the Greeks as "The Final Solution to the Greek Problem". As noted in the articles above, some editorial cartoonists are already beginning to depict it that way.

So, for those of you getting the "snippets" in the US news, that's a bit more for you to digest. Does this have significance outside Europe? Most definitely.
Posted by Aviator47 at 1:23 AM