A Question of Honor? 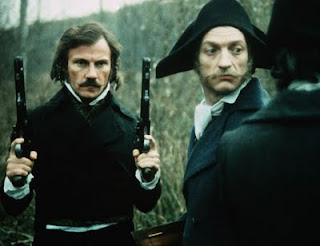 The Clausewitzian scholar Dr. Andreas Herberg-Rothe has published an interesting article titled The Concept of Honor in War.

The article is exactly what one would expect from Herberg-Rothe since he is an expert on Hegelian thought as well as on the theoretical side of Clausewitz. Herberg-Rothe has charted the development of Clausewitz's theory in an earlier work which I recommend. Simply put, Clausewitz's view of war evolved over time.

Honor here acts as a motivation for participation in war. War itself as organized violence between political communities would have an existential element.

Once a war is understood as existential, a distinction must be drawn among totally different forms of existence:

b. Existence as an intact, self-aware political community, society, or nation;

c. “Aspirational” existence, meaning an identity to be created by some act of self-assertion or liberation;

d. “Moral” existence, entailing recognition as an equal state among states, or as an equal citizen within a state.

Clausewitz’s Political Declaration implies a clear ranking of these forms of existence: at the very top he placed “moral,” followed by the continued existence of Prussia as a self-aware political community. For the sake of these first two forms, he was prepared to risk his own physical existence and that of the state.

This varied view of political or even physical existence connected with war is basic Clausewitz. Once again, he is able to come up with a series of simple statements which indicate a wide range of options, or ways of looking at something quite fundamentally, but allowing for insight at the same time. For instance Clausewitz's choice of (d) over the others indicates a profound insight. The state is separate from the "nation" (b). Not only that, but for a nation state to be "free" requires it to be recognized as sovereign by other states: (d). That is it can not exist in this "moral" way as a puppet state of another. It is better to risk the very existence of the state (d) in order to safeguard the integrity of the nation (b), but the existence of that nation as a coherent political community can still exist even as a puppet state, with the nation still resisting. Thus for Clausewitz it was better for the state to go down fighting, offering the nation a proper example and even hope for the future, than surrender ignominiously. This is what happened in Prussia after 1806. Prussia was defeated by France, but Napoleon did not depose the Prussian king but rather retained him as a figurehead ruler to maintain control more easily. Prussia continued to exist (b) but as a vassal of France (lack of (d)). Spain, on the other hand, after Napoleon smashed the Spanish state and placed his brother on the Spanish throne, continued to resist as the nation (b). It was this resistance, which inspired Clausewitz to come to his basic conclusion that "war is the continuation of politics by other means". The Spanish nation essentially rejected the imposition of a French king, thus rejecting the French-imposed state. This emergence of the partisan as a political actor and savior of the nation came across to Clausewitz as the natural reaction to the existential French threat.

Up to that point it seemed that Napoleon and his army would be able to defeat all before them. Given the combination of power to mobilize resources of the French state (material cohesion) and the élan and patriotic spirit of the French soldiers (moral cohesion) they had been able to defeat every traditionally composed enemy who had come up against them. Now faced with the partisan supporting the nation, they had finally met their match. Spain in effect pointed the way to dealing with the French threat.

For Clausewitz, Napoleon was a "real enemy", one that challenged the very definition of what not only Clausewitz and all Prussia thought themselves to be, but also one that brought their entire independent political existence into question (d).

Thus in Clausewitz's original concept, wars could be bloody, but they were not questions of physical existence for one political community/nation or the other, although individuals and even states were of course at risk, this being war. With the First World War we start to see a radicalization of this approach as the full weight of a political community/nation using the consolidating/organizing/administrative powers of the state to mobilize its full potential to fight becomes a reality. By October 1917 the political conditions had ripened to usher in a new political concept of existence.

An "absolute enemy", the Leninist concept as presented by Carl Schmitt in The Theory of the Partisan I introduced in my last thread would conflate these subjective and "objective" perspectives, actually conflating a, b, c, and d, making the enemy an existential threat to the political community/nation as a whole as if it were an individual. The distinctions between individual, political community, nation and state were lost. What makes this a totalitarian concept is that one side essentially has to exterminate the other, the other portrayed as an existential threat, but falling far short of such a reality, or in some cases constituting no actual threat at all. It should be noted that Lenin's original concept of "absolute enemy" pertained only to civil - that is revolutionary - wars, but was expanded after 1917 to include not only wars within political communities, but between political communities.

The target is always an abstract identity, a mental concoction created for ideological/propaganda purposes. So no existential threat, but rather the concept is used for internal political control/consolidation. The Bolsheviks and the "Whites", the Stalinists and the "Kulaks", the Nazis and the "Jewish-Bolshevik threat", the Maoists and the Chinese "feudal lords" are all examples of how this concept was applied for totalitarian political effect.

Could we include "Islamofascism" to this list of abstract identities?

So what of Honor? It is the title of this post and I have not said much about it. Part of the value set that makes up the individual's motivation to service is the concept of honor. I think we can see honor in at least two distinct ways. We have honor as egotism: It's all about me and if you cross me, you pay the price. The other type is honor as responsibility: I hold a certain place in the community and am honor bound to act in a certain way. To fail to act in this way would be by definition, "dishonorable". An excellent film that portrays both senses of honor is the 1977 film The Duellists . . . In the film we see both types of honor in action and how one can feed on the other, the egoistical fanaticism (the Harvey Keitel character) continuously met by the traditional acceptance of the obligations imposed (the Keith Carradine character).

What can this tell us today? Egotistical "honor" is timeless, existing in every age and culture, whereas "honor" as responsibility requires a traditional culture in which to exist. This may sound like a radical statement, and I suppose it is, but only to make the distinction between traditional communities and modern societies. In modern societies, we don't really have honor as it exists in traditional communities, but rather "civic duty" or "virtue". That is not to say that honor does not exist in modern families, it does, but that is how they are more similar to traditional communities than they are to modern societies. I would also point out that one of the main causes of family breakdown is the lack of a concept of honor, but then I'm a small town Southern conservative, so what else would you expect from the likes of me?

While honor as responsibility requires a community of like minded individuals to exist, since it is all about the meaning behind the action, not the result (value rationality in Weberian terms), modern civic duty or virtue is a means to an end (instrumental rationality). We pay our taxes and vote because they are necessary legally or for political stability, a means to an end. Honor as responsibility simply exists since a life without this concept itself would be meaningless, the action itself is embedded in a whole world of meaning and the result stoically accepted as being unavoidable, something akin to fate. If we connect this concept of honor as responsibility to our four forms of existence above we get a clearer notion of the motivation behind political commitment in not only traditional communities, but also modern societies.

If "honor" as it exists in traditional communities is of both types whereas in modern societies predominately egotistical (especially in consumerist societies), we get something of an idea of the disadvantage these modern societies have in fighting wars with more traditional communities. While the modern side enjoys a quantitative and qualitative advantage in terms of material it operates at a disadvantage in terms of motivation and meaning in regards to "existence".

This entire article is filled with interesting analysis. The points that Herberg-Rothe makes in regards to torture are important as well. It deserves a proper discussion.

Lenin shifted the conceptual center of gravity from war to politics, i.e. to the distinction of friend and enemy. That was significant and, following Clausewitz, a logical continuation of the idea that war is a continuation of politics. But Lenin, as a professional revolutionary of global civil war, went still further and turned the real enemy into an absolute enemy. Clausewitz spoke of absolute war, but always presupposed the regularity of an existing state. He could not conceive of a state becoming an instrument of a party, and of a party that gives orders to the state. With the absolutization of the party, the partisan also became absolute and a bearer of absolute enmity. Today, it is not difficult to see through the intellectual artifice produced by this change of the enemy concept.

This idea of the state as serving as an instrument of the party is common among scholars of Totalitarianism, such as Hanna Arendt and Hermann Rauschning.
Posted by seydlitz89 at 8:36 AM