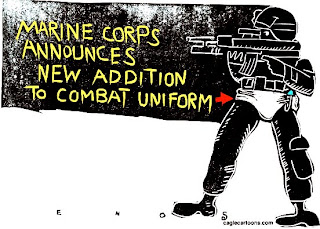 The Marines I have seen around the world
have the cleanest bodies, the filthiest minds,
the highest morale, and the lowest morals
of any group of animals I have ever seen.
Thank God for the United States Marine Corps
--Eleanor Roosevelt

The Marines have landed
and have the situation well in hand!
--Richard Harding Davis

Marines know how to use their bayonets.
Army bayonets may as well be paperweights
--Navy Times (1994)
_____________________
The news is abuzz with the story of the four Marines filmed pissing on the bodies of dead suspected Taliban fighters.

Begin with the premise that these are corpses are "suspected Taliban" -- dead, necro, stiff, checked out, finis, kaput . . . suspected. When did being Taliban become a death sentence? Don't Taliban sit in the Afghanistan parliament?

These Marines are warriors; it is extremely doubtful that a soldier would piss on a dead enemy fighter, but clearly the warrior culture permits the behavior. Presidential candidate Perry says the action was that of "kids" making a stupid mistake. Now Marines wielding deadly weapons are relegated to kid status. That statement seems as egregious as calling a black man a "boy", and yet it has passed nicely under the scrutiny of the porous Republican radar.

The pissing Marines are emblematic of a warrior culture run amok. Killing is no longer sufficient, so humiliation must be heaped upon the dead. However, this impulse to desecration runs up against the Geneva Conventions which were passed into law to provide minimal standards of conduct between combatants. Pissing on dead bodies is not in keeping with the intent of the conventions.

How do things like this happen? What is the command climate that permits such disregard of civilized human conduct? Does our training or our never-ending wars contribute to this mindset?

Some say, "What matter?" -- this is one small episode in a larger SNAFU. While that may be true, that fact does not diminish the import or significance of the act. The abject disdain and revilement shown in the act and its filming may be seen as the embodiment of the culture of elective wars, writ small. Peeing on dead opposition soldiers is a microcosm of a destitute military policy. The videotape of actions like this one will serve as future naufrages of a time and place.

The fact that fighting men would photograph this disgusting behavior is indicative of a bankruptcy of spirit which results from adopting warrior values. Warriors must be brave, but what matter if they are morally bankrupt? If the warriors are bankrupt, our social fabric is rent.

Psychologically, this is a sado-masochistic act in which the Marines are sexually humiliating a fallen enemy. The behavior is aberrant, but moreso when death and killing are involved. It is also (possibly) homoerotic.

You would not applaud the behavior in a snuff film, and yet a trash-talking female "news commentator" proudly declares she would "drop trou" and join in the Marine's pissing game. Most who oppose the situation only find fault with the filming of it. But would you want your daughter dating such men?
What sort of society are we when we execute and defend such behavior? Ranger believes the Marine's action signify a personality disorder, and he would recommend psychological evaluation and discharge on that basis.

This is a real pisher. The values of warriors are not the values of a liberal democratic philosophy.

Posted by rangeragainstwar at 1:23 PM