All the Troubles in the World

...are listed here - the source of the graphic below: 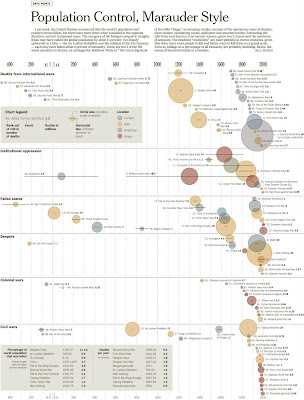 I find it interesting to note that some of what we think as truly appalling human conditions - chattel slavery, for example - last for years, decades, even centuries...and yet take a relatively small toll in human lives compared to, say, World War 2, which many of us still consider a Good War and one of the United States' "great adventures".

Which, I think, points up the caution needed in placing a price on horror in death alone. Slavery has always been considered one of the truly heinous human acts because of the wealth of misery it contains. There are, indeed, "fates worse than death" and few of them are remitted the slave.

What I do find interesting to note is the apparent increase in horror over the past hundred years or so. But then you stop for a moment and think of the centuries of human atrocity that have simply disappeared into the memory hole. Rome alone fought nearly constantly during her Republican and Imperial periods - Plutarch says

"[Janus] also has a temple at Rome with double doors, which they call the gates of war; for the temple always stands open in time of war, but is closed when peace has come. The latter was a difficult matter, and it rarely happened, since the realm was always engaged in some war, as its increasing size brought it into collision with the barbarous nations which encompassed it round about. But in the time of Augustus it was closed, after he had overthrown Mark Antony; and before that, when Marcus Atilius and Titus Manlius were consuls, it was closed a short time..."

I wonder; what will some future Plutarch write about our own country in our own time?
Posted by FDChief at 7:26 PM