Haiti, widely seen as a leading contestant on the reality show "World's Most Utterly Hosed Polity", got slammed by an M7.0 earthquake yesterday.

To put this in perspective, the San Francisco earthquake of 1906 - also on a major branch of a strike-slip fault, also in the vicinity of a major city, has been estimated anywhere between 7.5 and 8.25. This was a big earthquake, but not a HUGE earthquake.We think of the Caribbean as being worked over by hurricanes, not earthquakes, but the tectonics of the region are nearly as nasty as southern California, and the Enriquillo-Plaintain Garden fault system, the projected source of the movement, moves about 7 mm/year, "half the overall motion between the Caribbean plate and North America plate" according to the U.S. Geological Survey.Again, to give you perspective, the slip rate on the San Andreas Fault Zone is roughly 25mm to 30mm/year. 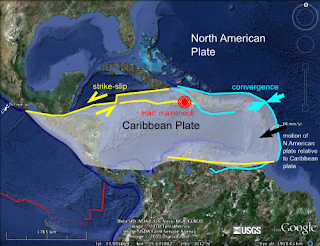 One thing to think about, though, is that we're going to hear a lot about this as a "natural disaster". But earthquakes have been happening since tectonics first began some time about 4.3 billion years ago. Unless you were spectacularly unlucky, if you lived in a wickiup and hunted or gathered your food, you probably lived through big earthquakes.

But a couple tens of thousands of years ago we began building ourselves permanent houses. Those houses were fairly ramshackle things, and when the ground shook, even moderately, they fell down on us and killed us. As in the Libyan fable, by our own feathers, and not by others' shafts, are we now striken.

We're going to hear a lot of hand-wringing about how awful a "natural disaster" this is. There'll be the usual assistance, the normal pantsload of helicopters, doctors and Red Cross volunteers. But call me a nasty, cynical son-of-a-bitch, but what we WON'T see is what Haiti needed and needs. 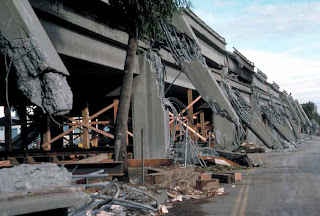 The last big strike-slip earthquake in the U.S. was Loma Prieta, 1989. Another M7.0, almost exactly the same as this one. Total of 63 dead, some four thousand injured. Lots of homes damaged.

I'll bet that the death toll in Port au Prince will be at LEAST in the low hundreds, probably in the low thousands, possibly even in the tens of thousands...with thousands more maimed or damaged in some way. In a quake almost exactly like the 1989 San Francisco event that killed sixty-fricking-three. Why? 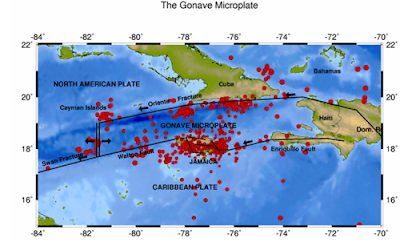 I'll tell you why. We have a pretty good idea how to design and build things to resist much earthquake shaking. In an M8+ all bets are off, sure, but for most quakes, we can design buildings and communities to get most people through the shaking alive.

But this takes money. And the political insistence to enforce building codes. And those two things are things that Haiti has in very, very short supply. So today, as always, many Haitians are dead who need not have died.

Because in Haiti, as in much of the world, lives are cheaper than structural steel and people are more disposable than dimension lumber.

Sympathy, donations and talk are cheap. Soldiers come and go. Changing the way the places like Haiti function is hellishly hard, and it seems pretty hypocritical to me to talk today about our sorrow for the victims of this while we were perfectly happy to ignore them before the first temblor because it would have required us to give a shit and do something about their crappy "government" and impoverished existence. 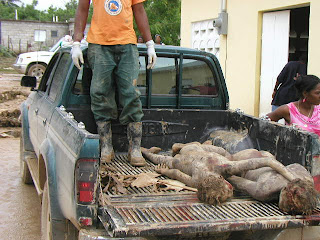 We can regret this. We can grieve about it. But until and unless we - and, more specifically, the Haitian ruling classes - are willing to commit large amounts of our money, political will and time to reorder the way people build, work and live in Haiti, we cannot change it.

(Cross-posted from GFT)
Posted by FDChief at 3:54 PM

Labels: bad govemment, geology, poor countries, the infallable ability of humans to fuck up anything