I have an odd sort of love-hate for Michael Yon.

He is one of the few journalists really willing to spend a LOT of time in some of the filthiest ass-end parts of the world finding out what's happening there. He also knows soldiers and soldiering in a sort of latter-day Ernie Pyle way, and I like that.

On the downside, he's a sort of dirty-boot Bob Kaplan, Tom Clancy with a notepad, a guy who's never met gee-whiz cool Aaaaaarmy training he didn't love. He's sort of a man-size eleven-year-old that way, and he commonly mistakes technical and tactical proficiency for strategic and geopolitical competence, and he always assumes that the GI's are the epitome of studly cool and the fuzzy-wuzzies are dirty rats. 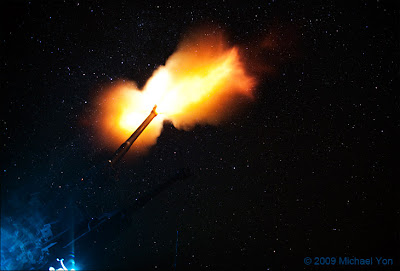 I love the fact that he has some great pictures and a nice little article about the gunners at FOB Frontenac (although, Mike? That'd be "Cobra Battery, 1st Battalion, 17th Artillery - the 17th Infantry are those guys walking around with the teeny little bullet launchers, remember?).

But as I'm enjoying the pretty night fire pictures I come across this:

"Sometimes the crews fire “H & I” or “terrain denial” missions. Harassment and Interdiction missions are fired at terrain known to be used only by the enemy at certain times, and so anytime the enemy feels like rolling the dice, they can move into that terrain. Such missions also provide influence for “shaping” the battlefield. If the commander is trying to flush the enemy into a blunder—maybe an ambush—or maybe to cut them off from an escape route, he can have the guns pound into a gorge, say, that is used as an enemy route. Or maybe he just tries to persuade the enemy to take a route where we have sniper teams waiting. The battery can be used in many ways that do not include direct attacks on enemy formations."

When I was just a mere slip of a redleg, my FDC Chief taught me that H&I fires in a LIC were the worst way of substituting motion for direction, a bad excuse for shooting unobserved rounds at a grid coordinate, a waste of rounds and a good way of pissing off the locals at you. 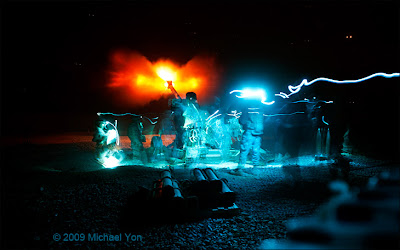 We did this shit a lot in Vietnam, where my Chief got sick of it. Typically you had no eyes on the "target", which could be a trail junction, the edge of a treeline, a river ford, anywhere. And since you were also typically in the middle of a farming district, these were also typically used by local Romeos slipping out to see their hootchie Juliets, woodcutters, farmers, enemy runners, monkeys, roebucks...just about damn near anything. But the point was that - despite what Yon thinks - you never really knew. It was a statistic, a way that the artillery battalion or brigade could say "We fired XYZ missions on Targets Able, Fox and Whiskey"

I have no idea if H&I fire is any better in A-stan than it was in Vietnam. But the fact that we're doing it at all...?