Everything Old is New Again

Jim and Lisa at RANGER AGAINST WAR have a nice little post up discussing something similar to the preceding post here - regarding what is happening to the U.S. economy and the apparent disconnect between the travails of the ordinary citizen and the circus act going on inside the Beltway.

"Discretionary wars, health care tampering . . . it seems like fiddling while Rome burns. Walmart is the new GM, and when this bellwether of our economic fitness is straining at the seams, doesn't that demand notice?"

Perceptive boyo that he is, the Minstrel Boy adds:

"...the game needed to be changed. the styles and rules altered. That wasn't done. also, the pig of bad debt, credit default swaps and other failed schemes has yet to move through the python of the economy. Without intense and often draconian measures to rearrange the way business is done, all we are doing is postponing the inevitable collapse."

The frustrating thing about all this is that this isn't rocket science. Pretty much anyone who has looked at market economies knows and knew that without some sort of regulatory and fiscal governor that the market goes through these booms and busts regularly. U.S. history is full of them, from the foundation of the republic until the Great Depression. 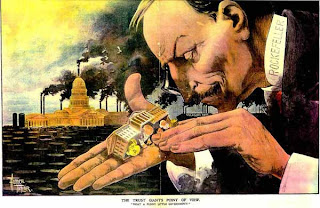 After 1932, though, and the rentier class having shat the bed so thoroughly that even the self-delusional Rockefeller wannabes couldn't pretend something wasn't wrong, the Roosevelt Revolution slammed down on the financial high-rollers, forcing them to swap some of their profits for the assurance that the Feds would prevent the proles from lynching them - and remember, they had Soviet Russia as a scary reminder that this wasn't impossible.

So most of us labored under the artificial stability of the regulated market for most of our lives. We thought that this sort of economic crash, the kind that destroyed people's lives and wrecked entire regions, was a sort of myth we read about in history books.

But Ronnie and his merry band of freebooters (and let me add that although the debased intellectual coin that brought us "Greed is Good" came from the Right, the political lifting that removed the New Deal brakes on the financial gamblers required many enablers of the Left, as well, the hypocritical bastards...) brought back the Big Casino, gutted Glass-Steagall, releveraged the markets and ushered in the financial crapshooters (Bob Reich, I think, said once that the only real financial "innovation" that benefited the average consumer was the ATM - everything else was a way for the financial insiders to spin illusory profits out of the bubbles) and, hey, presto, it's back to the Great Panics of the 19th Century.

So, MB, it's more than just a temporary digestive problem. I truly believe that we've fundamentally changed the way the game is played, changed it back to be closer to the way it was played in the days of the Robber Barons and the Gilded Age. 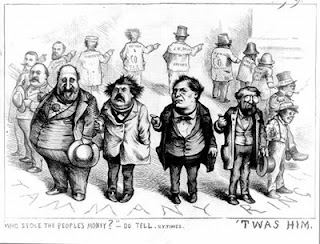