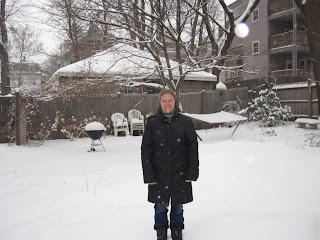 Anybody else think that 2010 sounds really strange? The older folks who hang out here will understand; the younger ones will get it soon enough. It's amazing how the years slip by until one finds it impossible to deny reality: dog, you're old. That was driven home forcefully when I returned home from our two-week sojourn in Cambridge, MA, to find this large booklet in the held mail: Welcome to Medicare. Oh, yeah, that's my next great adventure. Can't avoid it: 1945-2010 equals 65 years. Fortunately, with the exception of some minor signs of decrepitude, I'm generally in pretty good shape.

Yeah, I'm related to this woman. And, yeah, that's the kind of weather they've got where she's now hanging out. We spent those two weeks over Christmas helping her move from San Francisco to Cambridge, where she begins a new job as an associate director with a biotech firm located next door to MIT. Her new home is about two blocks from Harvard. I love the area, and we had a great time, but if I've got anything to say about it, future trips will take place in warmer months.

OK, enough on the kid. This post is really about how we spent the transition from 2009 to 2010. I'm going to tell you what we did and then I'm going to invite everybody else to discuss how they spent this New Year's. Maybe you'd even like to share your fondest or perhaps wackiest New Year's memories.

I think most of you know I live in the Hilton Head, SC, area. This is fundamentally a fairly upscale retirement/resort area. In the summer, younger folks come on vacation to go to the beach and play golf. Year-rounders tend to be old farts who've decided to retire to a place where they can wear shorts ten months out of the year, and golf year-round. The reason I mention this is because living in one of the many small communities here is somewhat akin to being in the military back in the old days. We're all transplants with our families and old friends elsewhere, so we tend to band together and socialize a lot. If you don't want to hang out with neighbors, this isn't the place for you.

We spent New Year's Eve doing something we'd never done before. A guy down the road—a retired lawyer—hosted a dinner with five couples, where we all paid for a sit-down deal that cost $130 per couple and included dinner (filets) and unlimited drinks, to include some very high end wines. Why'd we pay so much? Well, we had a cook, a fellow whom we all know well, a guy who's a chef and wine expert who works at a local place, cooking right there for us, serving us, etc. It was kind of the ultimate sybaritic experience; I felt I deserved it after having gotten the Medicare booklet. Three of the guys were military: me, another Army guy, and a Navy captain. The others were the aforementioned lawyer host and an engineer who grew up in Savannah. We drank too much and had a very good time.

Didn't have enough time on New Year's Day to nurse the hangover properly. Didn't see much football, either. At noon we went to a neighbor's open house, where the host and hostess served champagne and mimosas and cooked omelets and waffles to order for about 30 people. We took a break at home for about an hour and then went across the street for another open house. This one involved two huge hams, black-eyed peas, collard greens, corn bread (all traditional Southern fare), as well as tons of appetizers and desserts. Oh, and there was an open bar as well. Meanwhile, the wife had a pork roast cooking in the oven. It didn't get eaten last night, but it was good tonight.

So that's my New Year's. Most memorable? I don't know. There've been a lot. New Year's Eve 1967-68, I won something like $800 playing poker. Couldn't lose: I was leaving Vietnam the next day. That was like two month's pay; that, and the Freedom Bird made for a nice New Year's. The ones overseas—and I've had ten, best as I can recollect—were of course always unique. Not always pleasant, but always unique. Most of them in the States were a little more mundane, especially as I grew older and didn't party so much. I think that's why I appreciated last night so much: didn't doze off watching a million or so people pretending they're having a good time whilst freezing their butts off in Times Square. And yesterday without football other than as background noise, wasn't at all bad.

Please be gentle with me. I'll soon be an official senior citizen.
Posted by Publius at 5:11 PM