It now appears certain that the present Administration is going to commit something like 10-12 additional maneuver brigades (or the equivalent of 2.5 divisions in our presently effectively-divisionless Army) to the Umpteenth Afghan War.

Debate at this juncture seems meaningless. After all, it has been over a year since the Obama Administration took over, there have been endless debates on the subject, and at no point does anyone with any significant influence in Washington seem to have said "Well, sod this for a game of soldiers; let's just grab a hat." 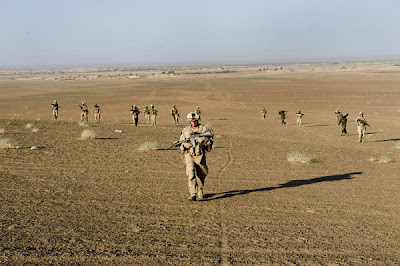 Fred Kaplan, one of the few writers at Slate with any pretense of having given this war any real thought, comes down tentatively, hesitantly, gingerly, what-ever-other-name-you-want-to-give-the-act-of-sitting-down-naked-on-a-bear-trap-ly on the side of continued engagement after reading off all the reasons that this foreign expedition will probably fail.

Fine, Fred. You've probably thought about this more than I have. But...here's the thing; to me, there's a hidden landmine, a real shot-to-the-heart, buried in the very last paragraph on the first page:

"Earlier this year, Secretary of Defense Robert Gates said that enlarging the Afghan army was the key to success (and to America's exit). In March, when Obama ordered another 21,000 troops to Afghanistan, Gates assigned 4,000 of them—the 4th brigade of the 82nd Airborne Division, a highly decorated combat unit—specifically to train Afghan soldiers."

Now I come at this from a very specific frame of reference. To wit: I spent about 8 years as an airborne medic and medical NCO in airborne line units just like 4th BDE (which, from the division's website, looks like two battalions of the 508 PIR (airborne light infantry) and a battalion of the 73rd Cav, which is no longer the light tank outfit it was when I was there but some sort of bastard wheeled recon/security organization in HUMVEEs). Pretty much standard-issue paratroops. Good on 'em.

They fight, and fight well. They include some truly outstanding NCOs who could teach eunuchs to fuck like mink. But "train Afghan soldiers"?

Nope. Sod THAT for a game of soldiers.

If this is what the "plan" is - to use some of our maneuver elements to straight-up fight the Talibs (a losing game in Afghanistan, where foreign troops can either be merciless conquerors or just passing through, but not really anything in-between, not successfully, not for long) and the rest to "train Afghan troops" - we're looking at a years-long arc of fail.

Training foreign maneuver forces is a hell of a tricky job, touchy as old explosives and calling for a very specific skill set that is usually developed over years if not decades. The British used to have a terrific knack for it; you had people like "Chinese" Gordon training the "Ever-Victorious Army" of mercenaries in 1860 and then the Khedive's Army in Egypt in the 1880s, Kitchener training those same Egyptians and Sudanese. Guys like Harry Maclean in Morocco training the hell out of the local bandits (that's him below, third from left with the lovely white whiskers) 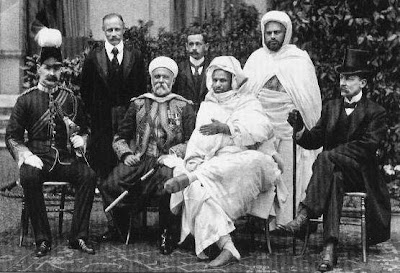 But these guys weren't doing something for freedom or democracy; they were working for the good of their own Empire. They were going to be there a looooong time, and knew it. They went native, and, largely because of that, were well outside their own regular Army, the very sorts of guys that today make up the 4th BDE, 82nd ABN and all the units like it.

Mind you, we used to have a bunch of folks like old Harry Maclean, whose specific job it was to do what he did. They were called "Special Forces" and their entire rationale was to sneak into Bad Places, train up local yobs into "Mike Forces", fight the Bad Guys and, if that didn't work, blow hell out of the place and split.

Mind you, this was before the SF was turned into Rangers with sexier hats.

But grabbing a bunch of guys off of Ardennes Street and expecting them to produce the 21st Century-equivalent-of-the-Indian-Army-of-the-Raj out of a bunch of illiterate Hazaras and starving Pashtuns? 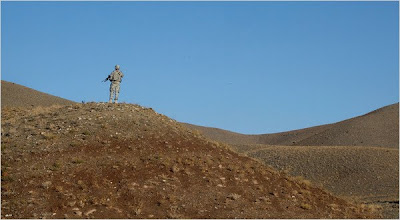 
(Endnote: after I published this I stopped and really LOOKED at the two pictures of the current GIs I had grabbed off the internet and my first thought was: what the FUCK are these goatscrews? A squad straggling through the desert like a bunch of Castro Street drag queens at the fucking Gay Pride Parade? Joe Snuffy going for his third attempt at a posthumous Purple Heart skylining on the knoll? Where the hell are their team leaders, squad leaders, and platoon sergeant?

Does anybody here know how to play this game?)
Posted by FDChief at 12:02 PM