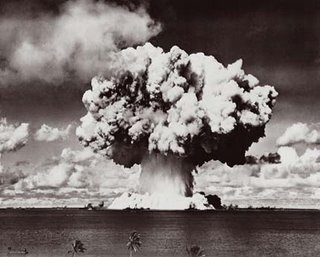 Three things happened in the 1940's to change our country's Middle East attitude from "Medina? Dude! Like, where's that at!?" to "Mine! Mine! It's mine. All mine! Putitdowndon'tplaywithitgetcherfuckinghandsoffitit'sMINE!":

1. The intense industrialization (read: automobilization) that had been underway since the beginnings of the Industrial Revolution went into hyperdrive during our Arsenal of Democracy thing, and multiplied our need for all petroleum products, especially gasoline.

2. The European colonial powers took such a pounding that they emerged from WW2 either unable or unwilling to maintain their former colonies (or both). The United States stepped into this "power vacuum", because...

3. The Soviet Union emerged from WW2 a "great power" - the other nuclear superpower - and provided America with an intellectual coffee table on which to set our Middle East philosophy: the Cold War... 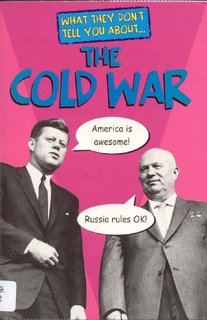 Which was, pretty much fully and completely stated, "stability".

Billmon over at Whiskey Bar is a much better writer than I am, so I'll let him explain this whole stability thing:

"The United States has tried to enforce stability in the Middle East because until Commander Codpiece came along foreign policy elites and American presidents alike viewed it as inherently in our interests to do so -- to protect the flow of oil, keep the Soviets out of the region, open markets to Western capital, and keep the Arab-Israeli conflict from getting out of hand.

You can argue (imperialists almost always do) that the masses benefited from this stability because it created security, promoted economic growth and improved living standards. The British crown tried that same argument on the American colonists in the 1770s with a notable lack of success -- and they were all Englishmen. But there is some validity to it.

However, our stability fetish (and our commercial interests) also required us to do business with brutal dictators and/or prop up corrupt feudal elites -- many of them little more than rent-seeking parasites perched on oil fields disguised as countries. Where authentic or semi-authentic nationalist movements appeared -- in Egypt, for example -- we either tried to crush them or buy them off, and usually managed to do one or the other.

We also encouraged our "friends" in the region to Westernize themselves, to abandon or at least dilute their Islamic identities and become part of the globalized culture of capitalism (not that they needed much encouraging). As the energy importance of the region increased and the penetration of Western capital and culture deepened, so did the level of U.S. intervention -- always in the interests of that precious stability.

It may sound like I'm just reciting the plot from Syriana. But these were real policies, deliberately pursued over many years. And they were, by and large, extremely successful -- both for us and for our clients in the region. They were, however, abhorrent to the fundamentalist, anti-colonial Islamic movements (like the Muslim Brotherhood) that had existed in the region since the days of the British and the French."

This whole stability-and-anticommunism thing started even before WW2 ended. Nazi Germany had won a lot of Arab sympathy with their fight against the colonial powers, and both Iraq and Iran were pro-Axis. The Brits reoccupied Iraq in 1941 and both Britain and the U.S. occupied southern Iran between 1941 and 1946.

In the postwar period, our quest for "stability" brought us back to the Middle East again and again. For the Arab residents of the joint we must have seemed insufferable, the strongarm suitor who never gets the hint:

Fairuza: Allah wept! I thought he would never leave! Did he try to put his hand up your dress again?

Maryam: AAAAgh!! Was that only his hand? I felt like he was trying to put me on like a fucking muppet. Wait...what was that?!

For most of the 40's and 50's we treated the Middle East like a pimp treats his best girl. As long as momma keeps doing what daddy tells her, she gets her lovin' man's best attention. Get out of line, though, - and occasionally the Arab countries did - and there was some pimpslappin' goin' down in the 40's and 50's:

As mentioned, we occupied Iran in the 40's. This was actually a good thing for the Iranians, because when Stalin refused to get out of northern Iran we were able (with the help of the U.N.) kick him out - remember, the Soviets didn't have a working Bomb until the late 40s - and roll the Iron Curtain back to the Iranian border.

BUT - when Iranian PM Mossadegh tried to move Iran out of the shah's U.S. alliance, we sent in the CIA and kicked him over. The Pahlevi shah then went on to cut sweetheart deals with our oil majors, setting in train the events that would culminate in the 1979 revolution.

Other than that, there was the usual involvement in coups and such: Iraq in 1958 and 1963, Egypt in the 50's, where we were widely suspected of working against Nasser and the "United Arab Republic", Pakistan (where we tried to use the Pakis to counterweight Indian infatution with Soviet Russia)... 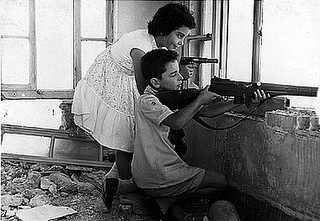 Oh, yeah. We also invaded Lebanon in '58 to knock down a Muslim Revolution... 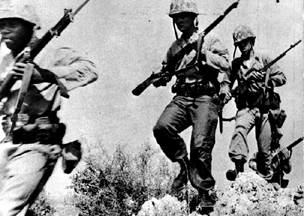 (we do this every so often, kind of like we did in Mexico during the 19th Century)...

But probably the single biggest change we helped bring about in the Middle East happened in 1948. 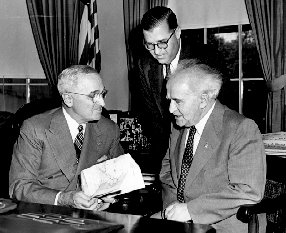 But more about that tomorrow...
Posted by FDChief at 12:09 AM