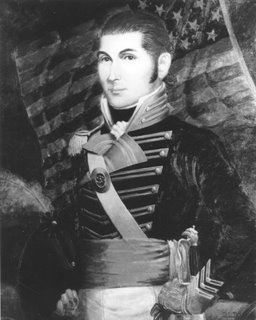 Pluto commented a little while ago about how quiet it's been around here.

Y'all've seen the movie enough to know what happens then - all hell breaks loose.

So here's my installment of hell.

I wrote these way back in August of 2006 over at Graphic Firing Table. If you overlook the breezy style (and I LIKE the breezy style - if you want solemn history, there's tons of textbooks you can read) the crux of the biscuit is that three years ago I wrote what I still believe: that all the thrashing about in the Middle East and southwest Asia isn't going to get us out of the fundamental trap we've put ourselves in with the act of recognition in 1948. It just ain't gonna happen. And why I feel all "talked out" about a lot of the Middle East politics and strategy and tactics we've been talking about since the old Intel Dump days.

Plus I just liked these and felt they deserved another airing other than burial in the deep recesses of the old GFT.

So - without further ado, here's "America and the Middle East", a four-part series.

Since this is such a huge subject, I’ve broken it into installments. This one, the first, is my rumination on U.S.-Middle East policy from 1776 to 1940. The second will cover the history of Americans in the Middle East from 1941 to 2006. I’ve already discussed the difficult propinquity of Israel and the Arab M.E., but I wanted to dissect U.S./Israeli/Arab policies in a single posting. And, finally, I wanted to take a look at what I feel are rational goals for the U.S. to seek in the Middle East, where we stand towards attaining them, what the likelihood of their attainment might be given our present policies, and what alternatives might be there for consideration.

Word up: our country just didn’t HAVE a Middle East policy until the beginning of the Second World War. None. Squat. Nada. As far as the sandy Arab parts of the world, we knew like a Dominican nun knows about Wesson Oil parties. Didn’t know, didn’t care to know. Besides, we had other stuff to worry about for about eighty years. Revolution, angry Canadians, hostile former owners, floods, famine, free silver, angry Mexicans, Fifty-four-Fourty or Fight, freesoilers, slavestaters, the Missouri Compromise, John C. Fremont and then, by God, the Civil War broke out.

So we DID have a teeny little run in with some Arabs during Jefferson’s administration:

President Jefferson: “Well, Robert, what have we here?”

Secretary of the Navy Smith: “Dispatches, Mister President. Our expeditionary force to the Dey of Tripoli. General Eaton and Captain Hull appear to have fought a smart action at Derna, you see, sir.

Pres. Jefferson: “I see. Hmm. Very good. Your Marine fellow O’Bannon writes well, there, regarding his actions in raising our flag over the harbor.”

Sect’y. Smith: “Ahem. The Marines appear to think highly of him, yes.”

Pres. Jefferson: “What the deuce is a “haji”?

Sect’y. Smith: “How our troops refer to the natives, sir. Oh, or a “sand nigger”.

Obviously, a young nation with an enormous frontier, a tiny military force and a relatively miniscule overseas trade had no real need to pay attention to the peregrinations of whatever tribe or tribes wandered the then-worthless wastes of the Arabian Peninsula. Any American attention on the Middle East in the period between the Revolution and the First World War would have been on the “Holy Land”, then a wholly-owned subsidiary of the creaky Ottoman Empire and of no real significance other than a romantic tourist destination.

The other consideration was the European colonial powers. Mostly the British, whose control of much of North Africa and India made American interest in anything remotely Arabian, well…problematic.

Lord Palmerston: “Just not yours to play with, Yank. Good luck with those redskins, though…”

That was that. The crux of the biscuit. The heart of the matter. America did nothing in the Middle East because we neither wanted to nor could. And that was the whole story, too, through the 19th and right through the first four decades of the 20th Century.

Until, as it changed so much else, the Second World War came along and nothing would ever be the same again.
Posted by FDChief at 12:13 AM