Brusilov and the question of Lessons Learned 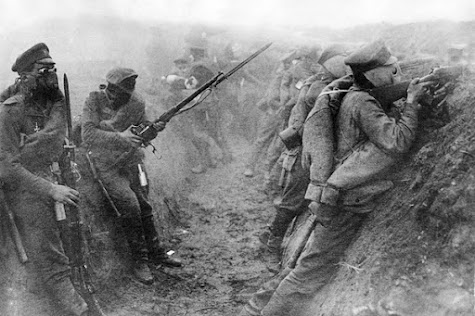 My Bride (who is a terrific person for lots of other reasons, too...) was wonderful enough to gift me Tim Dowling's 2008 The Brusilov Offensive and I wasted no time curling up amid the wrapping debris to begin reading.

In the opening chapter I came across something that intrigued me a bit, and thought I'd throw it out here for the patrons to swill along with their Christmas nog.

On page nine, Dowling recounts a general consensus among what he describes as "...a great many people - most notably the Russian general staff - that technological advances would play a minimal role." in the coming war of 1914.

He then goes on to say that this "cult of the offensive" dominated most of the tactical to grand tactical thinking of the European powers. The paragraph concludes with a summary of the work of Austro-Hungarian GEN von Hötzendorf, as concluding that "Firepower was certainly beneficial, but its effectiveness was limited..."

I won't argue too hard against this; certainly there was a hell of an influential clique for the attaque à outrance idea in the French Army, and most of the other combatant army planners of WW1 seemed unwilling to abandon the notion that you could figure out some way to outrun a bullet or a shell and gain that elusive decisive victory if you just tried hard enough.

I get that part of that had to have been the lack of actual Great Power combat in the forty-odd years between the end of the Franco-Prussian War and 1914.

You'd had the Russo-Japanese War just ten years earlier, and that had featured all the things that would kill all that "offensiveness" deader'n a Japanese rifleman hanging on the wire outside Port Arthur; deep entrenchment and obstacles behind machinegun beaten zones and heavy artillery.

Pretty much every other European power had observers with the combatants, and it sounds like a ton of them reported all the same problems for the attackers facing these defensive measures, it sounds like none of them - particularly the Russians themselves, if Dowling is correct - learned anything from the lessons of others.

That, in turn, makes me wonder; how often in history have we soldiers (or the civilian leadership that directs us...) done that - learned from the experiences either of our predecessors or others - versus how many times we've failed to learn those lessons? It seems off the top of my head that the failures seem more common than the successes, that it seems more likely that military organizations will fail to recognize critical changes in technical or tactical conditions rather than anticipate or adjust to them.

Is that really the case, though? Or am I just being influenced by a sort of military "recency factor" that occurs because those failures tend to be more spectacular than the less catastrophic effects when an organization does react and adjust appropriately?

And is this something that tends to happen to all large military organizations at some point? Is there an example of an army (or navy, or air force...) tending to be uniformly decent at learning from the lessons around them rather than having to learn the hard way?