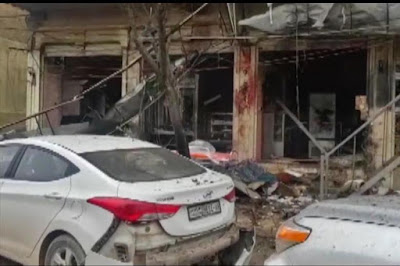 Lots of bloviation about the bomb assassination of a bunch of Kurdish "Manbij Military Council" militiamen and four of the U.S. liaison team meeting with them at a kebab shop in the Kurdish-held Syrian town, most of it pearl-clutching about whether "...this means the Islamic State isn't really defeated!!!"

No. My question is; how the hell does some Islamic State bomb squad get the intel on where and when this meeting is being held in time to get their fall guy there in time to blow everybody to hell? Is there some sort of IS pizza-delivery bomb taxi squad sitting by the phones, vests on, ready to burn rubber to where one of their spies has just called in a big meet between the YPG and the gringos? Is Manbij that porous, that IS guys can drift in and set up bomb-making and bomb-delivery units just where-ever, and that their guys can spot juicy targets and hit them at a moment's notice?

Or is the MMC OPSEC so damn poor that the IS guys knew about this a couple of days in advance?

Frankly, IMO all this does is make the case for grabbing a hat. If the only people in Syria trusted enough to embed GIs with can't do a better job of securing their own territory then it can't be done. We got the hell out of Iraq for the simple reason that we couldn't get the place down to civil levels of violence without Roman methods. This suggests that the northeastern corner of Syria is likely to be just as impossible.

No, boys. The Islamic State is never going to "be defeated" if by that you mean that they will be unable to kill people. If that's your endstate the U.S. might as well make Syria the fifty-first goddamn state, because we're going to be there forever.
Posted by FDChief at 12:36 PM