From the Department of Not Learning From Your Mistakes...

...comes the news that the cunning plan behind the U.S. government's re-imposition of economic sanctions on Iran is the notion of "regime change".

This would be fatheaded in any case, given the history of U.S. farkling about in Iran and the predictably resulting blowback.

But after the spectacular own-goal that was regime change in Iraq it would take a complete moron, or John Bolton (but I repeat myself...), to presume that whatever might succeed the mullahs in Tehran because of U.S. political and military pressure will be anything but a complete foreign policy disaster for American interests in the Middle East and a nightmare for the region that has seen too many of them.

The Trumpkins are here emulating the epigrammatic Bourbons, who supposedly "learned nothing and forgot nothing". One can only assume from this that "making America great again" is functionally indistinguishable from the effect of being repeatedly dropped in your head while a child. 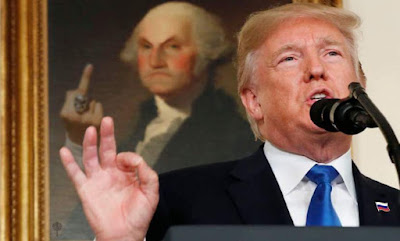