Our old pal Phil Carter has a thoughtful (as is his wont) piece at Slate discussing the latest of "all the best people" to work for The Fraudulency Administration; the new head of the Veteran's Administration, long-time White House physician Ron Jackson. 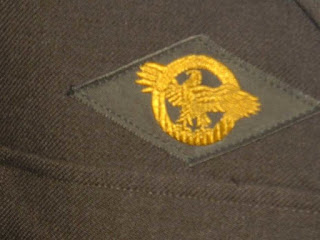 I've been lucky. I made it out of the service with little more than some sore knees (which were, apparently, a congentital problem that my entrance physical should have caught and 4F-ed me; I saw a doc at the Portland Knee Clinic back in the Nineties who had been a draft board physio during the end of the draft years who said that he'd have rejected me out of hand) and have had employer-based (meaning, no more than normally-shitty) medical benefits my entire working life.

But I have friends who have ended up in the VA, and their care has ranged from outstanding to horrific. Apparently the just-canned VA chief spent a ton of time fighting with the GOP who, as the GOP does, want to ensure that tax money goes to pay defense contractors to gold-plate weapons (which, admittedly, is a Democratic failing, too) and not to pay for medicine for sick people, even sick soldiers (which is NOT a Democratic failing).

As Carter points out, this new Trump hire, unlike most of the Trump cabinet hires who are chosen to simply destroy the parts of their agencies they can't loot, is simply unprepared for the hellfire he's going to encounter:

"These are hard policy questions; they are made more difficult by political conflicts within the Trump administration, disagreements between the administration and Congress, and tensions across the broader veteran community as well. Shulkin battled daily with Trump’s partisans; their relations deteriorated so badly that Shulkin reportedly barred several appointees’ access to the VA’s executive suite, and the White House barred Shulkin’s access to the press. Neither the White House nor Congress nor leading veterans organizations agree on how to resolve any of the policy dilemmas facing the VA. Jackson will walk into this crossfire—and do so during a contentious midterm election year."

One of the most ridiculous conceits of the American public is the notion that governing is easy, that anyone can do it, and that any sturdy yeoman can be elected to office and simply take charge and succeed (the other is the notion that, in a public democracy "government is the problem"; in a republic the government is YOU, dummy - if it's a problem it's because you need to be better citizens...). This idiot notion explains why a lot of people voted for a real-estate shyster who promised to run the country like a business.

Well, okay, not like HIS businesses, which went bankrupt numerous times, but, like, a business-business. Or something.

But, of course, government is NOT a business, and what makes businesses successful may be ineffective, or problematic, or even criminal, when applied to governance. And what makes you a good officer, or a good doctor, may not make you a good administrator of a huge, complex, medical and social welfare organization.

Not that our current Chief Executive would know that. Or care; it's all about the brand, baby; it's all about raking in the bucks for the Trump Organization. THAT's the only organization set up to profit from our present regime.

As we're all discovering.
Posted by FDChief at 4:23 PM