...lookie at the latest "all the best people" our Napoleorange has brought back into the corridors of power: 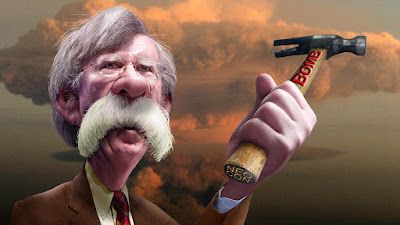 The Economist - hardly a bastion of cuddly liberal peaceniks - had this to say about him over a decade ago:

"Mr Bolton had already made a name for himself as an arch-conservative and fierce patriot. He believed “multilateralism” was a dirty word, treaties were not worth the paper they were written on and American might was right. Diplomacy, he told Mr Bush, was “advocacy, advocacy for America”.

"But in an organisation where nothing gets done without a readiness to make friends, form coalitions and accept compromises, Mr Bolton put almost everyone's back up."

Which is a way for polite British Tories to drawl "I say, what an enormous asshole..."

Remember "Hillary the Hawk, Donald the Dove"? Remember that? Well, if you're still kidding yourself that Trump is some sort of populist iconoclast who is going to break the neocon headlock on the GOP's foreign policy that pretty much begins and ends with "bomb-bomb-bomb, bomb-bomb Iran" then look around the table.

Nobody else is the sucker, so...

I swear. Every time I think this chump has driven my country as deep into the Big Hole of Stupid as possible...

Update 3/26: Doanvo adds another layer of stupidity to the stupidity of this appointment; Bolton is a spectacularly prolific and remarkably pinheaded liar.

“Bolton seemed to be troubled because INR was not telling him what he wanted to hear.” He soon “surrounded himself with a hand-chosen group of loyalists” to analyze raw intelligence on Iraq without input from the intelligence community itself.

Fast forward to the 2016 election, and Bolton’s assertions have become even more unhinged, leaning further into absurdity than the most volatile pundits will venture. In December 2016, he called Russia’s election interference a “false flag” operation conducted by the Obama administration."

As a prolific and remarkably pinheaded liar himself Trump needs as many rational people around him as possible. Adding this jamoke, between his ridiculous warmongering, insane worldview, and facile lying, is like giving a chimp a live grenade. In an Administration full of bad appointments this is a really, really, really, REALLY bad appointment.
Posted by FDChief at 6:18 AM