Today's entry is in the "Oldies but Goldies" category, re-titled,

Ranger nailed this one two years ago to the day: 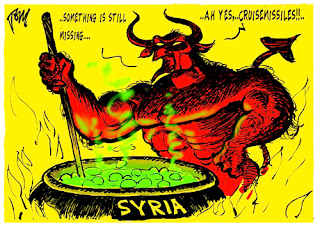 Blessed are the peacemakers:
for they shall be called the children of God
--Matthew 5:9

The run-up to the bombing of Syria has been full of the usual bloviation justifying the use of violence as the American Way of problem-solving. But if and when we bomb Syria it will not be war, because the United States has lost the ability and skills to fight  a real war with all attendant features.

If we contravene the efforts of the world community to stave off our brinkmanship -- if we drop bombs on Syria -- this will be violence without purpose. Do not mistake the application of violence as war; it is not war. It is simply a flash and bang simulacrum of war.

Ranger's Rule of Order #1:
Adding violence to an already violent situation will not ensure a peaceful outcome.

Corrolary: The result will be de facto a continuation of the violence. For civilians, this act is akin to adding salt to an overly salty soup; potatoes would be a more sensible addition if the goal is to ratchet down the saltiness.

Dropping bombs is not peacekeeping.

In war, violence is added to achieve goals, but in peacekeeping violence is SUBTRACTED to reach the goal. At least, that's how it should be.

Even for a Ranger who prides himself in his simplicity, this is embarrassingly simple to have to state.