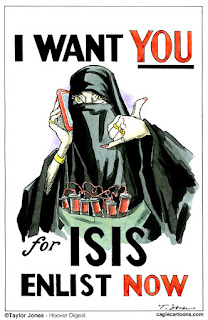 Welcome to the jungle we've got fun and games
We got everything you want honey, we know the names
We are the people that can find whatever you may need
If you got the money honey we got your disease
--Welcome to the Jungle,
Guns 'N Roses

Fish gotta swim, birds gotta fly,
I gotta love one man till I die
--Can't Help Lovin' That Man of Mine,
Porgy and Bess

While the topic of the Islamic State (IS) is perversely fascinating, we will instead look just at our reaction to the group, a reaction which violates the principles of war, diplomacy and logical thought. A reaction not equal in reason to the actions of IS, which are clear, evident and understandable, if not grotesque.

The United States has killed both the No. 1 and No. 2 leaders of IS to much fanfare, but to what end? No military or political objective was accomplished in the execution of this very costly project. The U.S. Homeland is no safer. As such, our effort is wasted, and our violence just as criminal as theirs.

Reports indicate that 15,000 IS troopers have been dispatched to the next life, hurried along by ~5,500 U.S. airstrikes. This equates to a success rate of 2.73 kills per strikes. Parsing the cost of each airstrike, are they cost-effective if they do not achieve a military objective?

Are these casualties worth the expenditure, or could our dollars be better spent on social programs here in the U.S.?

Aside from the crack 54 -- each earning a cool $400 per month-- one must wonder whose pockets are being lined by the overflow. Someone is benefiting from this egregious expenditure, and it is not the average U.S. taxpayer.

The U.S. pays big bucks for questionable proxy-quasi-allies to fight against people who pay nothing for theirs. So who is winning this asymmetrical war?

Choose any field you wish on which to apply your metrics.