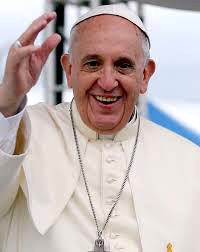 Terrorism Counteraction (TC/A) training taught us to think like terrorists, but that may be a fool's errand since few who have been brought up in the Western mindset can think that way.

But today, let us try and think like a terrorist.

Pope Francis, controversial in some circles, will visit the United States on 22 September. He recently held said priests could absolve women of the sin of abortion if they are contrite when they seek forgiveness. To some fringe fundamentalists, this is as bad as sanctioning abortion itself, and much as they would kill an abortion provider, so too they might try to kill the Pope. (It is not as though attempts have not been made on the lives of other pontiffs and abortion doctors.)

Feminist extremists could also see the Pope as a target for his refusal to eliminate the "celestial glass ceiling" and keeping women in support positions (=nuns) versus ordination to the forward leadership positions. To hell with being Rangers, these women would aspire to being Pope.

Add in the contingent that wants to throw illegal aliens out of the U.S. Doesn't Francis argue for compassion, and isn't he suspect of being their advocate, being of South American and not European origin? So here are three disaffected groups before we even leave the runway.

Now add in Islamic extremists and you have some real possibilities for an assassination attempt. It would be quite a coup, in terrorist-think, for any of these groups to execute a mission on U.S. soil.

What could the U.S. do to counter the threat?


If there is anyone who wants the Pope dead, the U.S. would be a great place to kill him. This is a sad thought, but it is thinking-like-a-terrorist.

Is anyone discussing this potential eventuality?
Posted by rangeragainstwar at 6:17 AM