Back in the early 1960s there was an incident at the firm where I worked that became legendary. Bob, a WWII veteran with a steel plate in his head was in Chicago on business for a few days.  In winter, he had to wear a hat, and the wind blew his hat into the street and down a storm drain.  He found a suitable replacement for $5 and continued on with his business.  When he returned, he put the $5 on his expense report, since being away from home precluded using another hat he already owned, and thus, in his view, was a medical expense directly related to his being on the road for the company.  His boss rejected the expense report with a prolonged rant.  So Bob went back to his desk, filled out another report, raising the total for his meals (for which no receipts were required if below given thresholds) by a total of $5.  He attached to the report a note, "While on business, my medically required hat was blown away, and I could not find it. My total legitimate expenses on my first report were $xxx.xx, including the hat.  Here is a second expense report for $xxx.xx, but without the hat.  You find the hat!"  The supervisor signed the original report, and it went through unchallenged.

We have previously discussed the Greek crisis.  One of the aspects of "corruption" in Greek society that arises is tax evasion.  The new government has made it a goal to attack tax evasion by the wealthier Greeks.  Critics of Greek society point out that many, many small businesses regularly and routine choose to do business "off the books", and thus don't issue receipts, avoiding VAT and income tax.  I can only speak for Paros, where I live, but in 10 years, I would say that the vast majority of our purchases, both large and small, have resulted in our receiving a cash register receipt.

Now, as an academically trained "political economist" whose specialty was labor market theory, it has interested me to see the blanket condemnation of self employed Greeks doing some business off the books.  Let's begin with some sociological factors.  For a variety of cultural reasons, 36% of the Greek workforce is self employed/family employed.  That's five times the rate in the US and 3 times the rate in Germany.  Businesses and real estate are handed down through the generations.  There is a strong personal bond between the people and their land and business.  Many would rather toil on their own for a meager wage than for a meager wage from WalMart.  I cannot begin to describe the mixed emotions in my Sicilian family when first my brother-in-law, and then I did not show an interest in joining and hopefully take over elements of our family's successful businesses.  It was almost as if we said we would not produce offspring to perpetuate the family name.  Americans really do not aspire to carry on the family business, unless it is extremely profitable.

Now, American right wing hype is that "small business is the engine of America", but the type of small business they refer to still does not result in a relatively large number of "self/family employed" people in the work force.  In fact, self/family employed represents just under 7% of the work force.  The vast majority of Americans work for somebody else, and can engage in very few personally enriching tax avoidance tricks in the conduct of business transactions.  They have to find other ways to evade taxes, often by off the books sidelines that do not show up in the labor force statistics, like eBay or unreported side jobs.

Now, why do employers like WalMart, McDonalds and most others ring up each and every sale?  Because they are honorable?  Hell no. It is because sales are rung up by employees and scrupulous ringing up is done to prevent employee theft.  Robbing the till has to be a very tempting thing for someone who can hardly put food on their table, etc.  If the register doesn't balance at the end of a shift, it ain't pretty.  It's a simple and easy to enforce compliance system when the owner of the cash register is not necessarily the operator of it.  While employee theft cannot be stamped out, it is included in the cost of goods sold, raising retail prices, which could reduce demand if prices rose enough to suppress demand.  Thus, the less than altruistice reason for keeping employees as honest as possible.  There is a limit on how much cost you can pass on to your customer.  Americans operating the cash register are basically honest because corporate interest, not social values, make it difficult to be otherwise.  I would also mention that such firms use other techniques to avoid paying taxes, and they do a fine job of it.

Of course, the US has other venues that allow and/or encourage  the WalMart, McD and other low wage earners to afford food, clothing and shelter.  It's called Food Stamps, Housing Assistance and Medicaid.  It's has been estimated that WalMart employees alone receive some $6 billion per year from those programs.  So, these retail giants may not be hiding sales and employment to evade taxes, but their poverty wage employees can "afford" to work for them at taxpayer expense.  You find the hat! 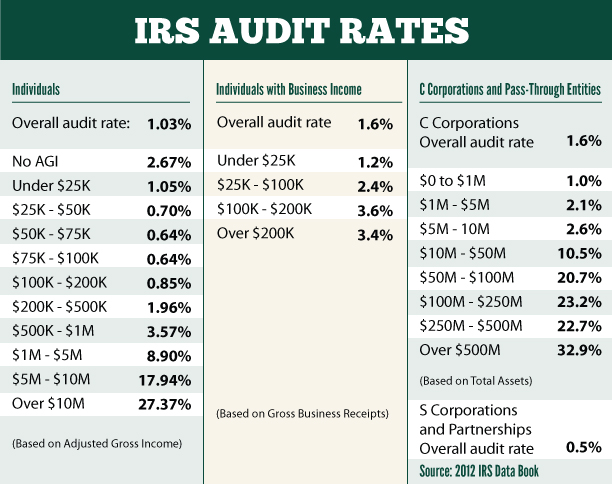 Now, look at typical IRS audit rates.  The emphasis is on higher revenue brackets.  Why, because that makes economic sense.  The amount of revenue involved addresses higher potential tax liability in absolute terms.  Keep in mind that only 7% of the workforce is self/family employed, so it doesn't take a lot of IRS resources to audit 2% percent of these folks.  It's a simple cost/benefit tradeoff.  Consider the magnitude and cost of trying to audit a workforce 5 times that size in proportion to the total.

Now back to Greece.  36% of the workforce is self/family employed.  In a shrinking economy where there are no Food Stamps, etc to help in bad times, the temptation to under report income is very powerful.  Unlike the WalMart or McDonalds employee in the US, shit wages in Greece are not supplemented by tax funded benefits.  Thus, Manolis the plumber, when having trouble putting food on the table, might put an extra 15 Euro in his pocket by not issuing a receipt for a 100 Euro job.  The WalMart worker is called "compensating for being exploited" for his tax funded benefits, and Manolis is "corrupt".  Yet WalMart wages are costing the US taxpayer billions in welfare costs, where the taxes evaded by all the Manolis' and Dimitri's unreported income might just pale in comparison.  You find the hat!

And, of course, economists are totally comfortable with the WalMart Model, as it all shows as part of GDP, while the Manolis Model doesn't.  Heaven forbid poverty should make GDP figures inaccurate.

How prevalent is under reporting in the US?  I have no idea, but I do have first hand knowledge of one case.  Years back, a doctor friend let his wife open a small botique in a local strip mall.  She was fashion savvy, but not business savvy, but as long as she broke even, he saw it as an good outlet for her.  Business was tight, and she couldn't afford enough part time sales people.  Several of the other merchants in the mall showed her how to hire high school students off the books, and how to cover those expenses by not ringing up an amount of sales that offset the employees' pay.  Just took a little time and effort to keep track of the expense and income on a separate ledger.  Just keep one kid on the books for appearances sake.  They all did it.  The avoidance in sales tax, social security, unemployment and workers' comp taxes was considerable enough to allow her to have three instead of two part time employees, and still earn enough profit not to set off any alarms - until she was telling her accountant about their wonderful two week trip to Hawaii, and he saw full revenues during those two weeks from a store that claimed only 10 hours/week of employee payroll expense.  He said that the knowledge of her vacation and what that implied precluded him from doing her store's taxes.   She simply changed accountants.  When her husband finally learned what she was doing, he shut her down and held his breath for the statute of limitations to pass.


I have no idea what level of tax revenue is lost via unreported sales in Greece.  But, before getting my panties in a twist about it, I consider the difference between Greece and the US in terms of the cost of taxation to subsidize low wages with welfare and the cost of tax evasion to supplement low wages, and I honestly have to say, "You find the hat!"

I'm not comparing what might be morally nor legally right or wrong.  I'm simply suggesting that life ain't as simple as some would wish it to be.  It may be true that what is good for the goose is good for the gander, but before you deliver that good, you better be sure that what you are calling a gander isn't a swan or a penguin or a cow.
Posted by Aviator47 at 7:33 AM