. . . or rot in hell depending on your point of view.  Dead at 102.  Outlived his counterpart Robert McNamara.  Outlived his fall guys, Generals Navarre and Westmoreland.   But then Giap had two things going for him that Navarre and Westy did not: 1] it was his backyard whereas his enemies were over 10,000 miles from home, and 2] he had a sanctuary, his enemies did not.  He also outlived two other of his victims.  He was still Defense Minister when Vietnam beat Pol Pot's Khmer Rouge and General Xu Shiyou's PLA.  Too bad for his country that he was too old and retired from military affairs in 1988 when China occupied Vietnam's Johnson Reef and killed 64 Vietnamese soldiers. 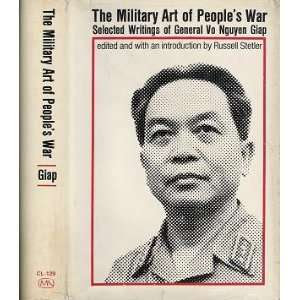 He was self-taught in matters soldierly.  He did not turn to a military life until his thirties.  He went to High shool in Hue, college in Hanoi, and did further study in Paris and China.  Started his adulthood as a teacher and a journalist unlike Navarre who graduated from Saint Cyr, and unlike Westmoreland who was an honor graduate of West Point.  But even as a younger man he read extensively of Napoleon (especially of his mountain campaigns), Sun Tzu, the American Revolutionary War, and then later he read Mao.  And what Wikipedia and Vietnamese sources will never divulge, he also had some military training from an American OSS team.  Giap is the short dapper one in the white suit and my father's dark fedora hat two down on the right from a young Ho Chi Minh in shorts.  The American soldier between them is US Army Major Allison Thomas head of the OSS training team.

General Hal Moore, who co-wrote "We Were Soldiers Once . . . and Young" about the battle of Ia Drang, said that Giap was " ... one of the greatest military commanders of the 20th century".  Westmoreland called Giap a butcher in a 1998 interview in George magazine: "Of course, he was a formidable adversary . . . but he persisted in waging a big-unit war with terrible losses to his own men. By his own admission, by early 1969, I think, he had lost, what, a half million soldiers? He reported this. Now such a disregard for human life may make a formidable adversary, but it does not make a military genius."  Both Moore and Westy may both have been right, sour grapes or not.

Giap's birthplace, Quang Binh, is the province just north of the DMZ which took the brunt of America's air war against the north: thousands of tons of bombs more than any other province in the north.  LBJ had no restricted targets in the North Vietnamese panhandle where Quang Binh was located.  Not just B-52 arclights, and Navy and Air Force Alpha strikes, but it was also a dumping ground for any returning American aircraft that could not get to their primary target for weather or any other reason.  The photo below shows Giap congratulating workers of the transport boat team on Gianh River just a few mile north of the DMZ in 1968.  I first thought it was staged, but now I think not.  He is one of their native sons, not some Hanoi bigwig.  He is talking to them in their own drawling central Vietnamese dialect, which is as different from the harsh pronunciations of the north and the tonal patois of Saigon as is the speech of an Iowan farmer from Brooklynese or Dallas twang.  They are liking him for being just a country cousin like they are and a local boy made good. 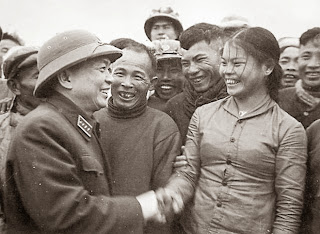 There is an interesting story that the spot he was born in was under the shadow of a jackfruit tree.  Or interesting to this vet anyway.  The jackfruit (mít in Vietnamese), although a sweet delicacy, has some martial arts overtones in central Vietnam.  They have a thick pale green rind with thousands of sharp hexagonal spines.  There is an old ballad from that part of the country about a blind hero using jackfruit rinds as some type of brass knuckled fist coverings during a Vietnamese boxing match.  So I suspect that story may be apocryphal, sort of like Washington's cherry tree.   Anyway if there is a good Viet restaurant in your neighborhood try the jackfruit salad or mo' better try the dessert of sweet ripe jackfruit in coconut milk if they have it.  You won't regret it!