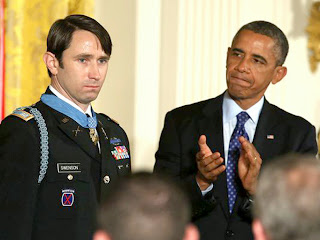 
Reportage on the on the most recent Medal of Honor recipient from the Wars on Terror -- Army Captain William Swenson -- carries a misstatement:

"[this award] marks only the second time in the last 50 years that two American service members have received the Medal of Honor for actions in the same battle.

"In 2011, Dakota Meyer, a Marine sergeant who also is now a civilian, was awarded the Medal of Honor for his actions in that Sept. 8, 2009, battle in Afghanistan" (Obama: Washington can learn from Medal of Honor recipient.)


Ranger presumes the article's "second time" refers to the MOH's posthumously awarded to Randall David "Randy" Shughart and Master Sergeant Gary Gordon for their actions in the Battle of Mogadishu (Oct. '93).

However, in fact the Vietnam War Battle of the Ia Drang Valley (LZ X-Ray) in 1965 produced three Medals of Honor, a battle within that 50 year window. However, somehow we still give that war and its participants the short shrift.

The MOH recipients from the Battle of LZ X-Ray were 1st LT Walter J. Marm (15 Feb 67); Captain Ed Freeman (16 July 2001), and Major Bruce Crandall (26 Feb 2007). It is only appropriate that the MOH finally be awarded to an Infantry U.S. Army Captain. Capt. Swenson did what one would expect from an officer under dire circumstances; he deserves our praise. But let us not forget Marm, Freeman or Crandall.

Let us also honor the MOH recipients from that war no so long ago -- my war -- by remembering the names of those men and their actions.
Posted by rangeragainstwar at 1:41 PM