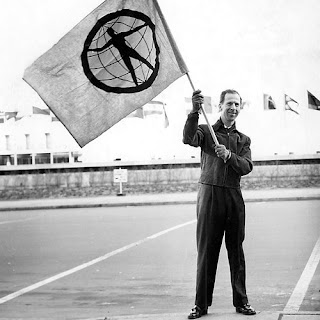 Garry Davis, dean of the One World movement, in 1956.
He had his own flag and passport, and often his own jail cell.

You say you want a revolution
Well, you know
We all want to change the world
But when you talk about destruction
Don't you know that you can count me out
--Revolution, The Beatles

[Offered in the spirit of a cease-fire, a follow-on to Ranger's earlier post on patriotism, The Troika]:


How do we define patriotism? Is it a secular faith? Is patriotism necessary in order to permit a government to cohere and flourish amidst a diverse populace? Not everyone can be a One-Worlder like Garry Davis (God rest his soul), after all.

Perhaps patriotism is an ennobling feeling which could be directed towards perfection of the national entity. Why does it so often devolve into an adversarial relationship among fellow nationals?

Is patriotism one of those strong primal emotions like love, one which can go horribly wrong if invested in the incorrect thing? (Ranger avoids such road hazards by sublimating his strong emotions into his writing ... but not everyone has pen and pad.)

Do terrorists have patriotism? Can they be patriotic to their home nation, while being patriotic also to their cause? If not, must terrorists step outside of their government's creeds in order to be terrorists? Are terrorists effectively a government unto themselves?

What is good about the feeling and/or action of patriotism, and what is detrimental? Can patriotism neutralize violent religious fervor? Or, is it just the opposite, and does it foment such fervor, acting in tandem with or as an accelerant of it. Alternately, is patriotism not an either-or phenomenon?