The Law In Its Impartial Majesty

Here's the thing: by UCMJ, the guy is guilty as hell of the charges he was convicted of. 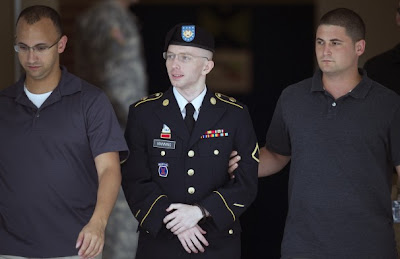 And the news, as it has always been, has been and is going to be about this one guy, himself, and all his little quirks and tics and the "inside baseball" of the trial and the implications of the not-guilty verdict on the charge of "aiding the enemy". All sorts of people in the U.S. are going to have little hissy fits because this joker is going to jail for being guilty of the crimes that...well, that he did knowing they WERE crimes under the UCMJ.

But here's the other thing; focusing on Manning the man and his trial, is part of the whole damn problem that Manning's acts and his trial throw a damning light on.

Manning uncovered tens, maybe hundreds, maybe even thousands of cases of every sort of problem and trouble in our country's doings both here and abroad ranging from individual and official malfeasance all the way up to arguable war crimes, doings that had been kept from us, doings that We the People as the putative sovereigns of the United States might have been well advised to be knowledgeable of.

We the People responded to that damning knowledge with a massive collective yawn and a fucking shrug.

The problem we're facing in this country isn't that PVT Manning is going to lose the rest of his life at the U.S. Disciplinary Barracks. Hopefully he knew what he was doing and did it anyway, knowing that he was going to take the fall for the rest of us.

The problem - and hopefully Manning himself would be the first to agree - is that nobody else, nobody named in all those documents he stole, nobody in the ginormous chain of liars, thieves, grifters, thugs, and butchers that got us into Iraq ten years ago, not a goddamn one of the people responsible for all those deaths, all that loss, all that pain and suffering and misery is going to lose so much as a fucking lunch break over their actions. 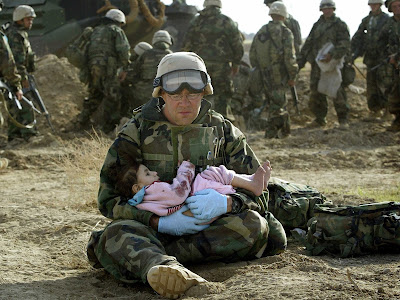 And I don't know which is more infuriating; that that pissed me the hell off, or that the rest of my country doesn't seem to give a damn.