Atkinson writes well and has done his research; his Army at Dawn was a good summary of the U.S. North Africa campaign. The second volume is equally comprehensive on the campaigns for Sicily and Italy. Makes for a terrible story; you have to wonder what the hell the Allied leaders were thinking ("soft underbelly"? My ass). It's popular history, yes, but well-drawn and (so far as I can tell) sound on the major events and controversies of the place and time.

But that's not really what I wanted to talk about. It's these guys: 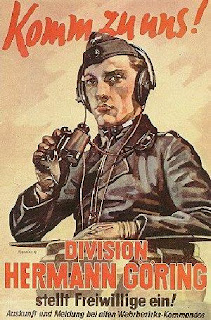 You can't make your way around North Africa, Sicily, and Italy between 1942 and 1944 without stumbling over this outfit, perhaps one of the oddest in military history; an entire armored division owned by an air force.

The Hermann Göring armored division was probably the strangest end-member of the Nazi penchant for empire-building, internal as well as external. The capability of the German ground forces in WW2 - and even the most Allied-biased have to admit that on the tactical level the German armed forces were largely better at their work than pretty much any of their enemies - is fairly remarkable given the almost-Byzantine-level of complexity of the Wehrmacht. Alongside the Heer, the regular Army, you had a completely parallel Nazi Party army in the "armed" or Waffen SS.

And beside them, you had damn near an entire freaking air force army. 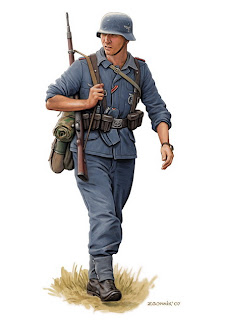 You could say that the German military of the Forties did it exactly backwards from the way the U.S. did it; in the U.S. of 1943 the air force belonged to the army. In Germany, the air force HAD an army; 22 Luftwaffe feldivisionen, or "Air Force Field Divisions" That's not even counting the fallschirmjäger; the eleven divisions of German paratroops came under Air Force command (as did everything else that flew than that the Reichsmarschall could get his pudgy fingers on).

But you can make kind of a case for the paratroops (the Soviet paras were part of their air force, and even the early U.S. Army experiments with airborne troops flirted with the notion of slotting them into the USAAF), and the feldivisionen were flat-out a mid-war expedient forced on the Wehrmacht by Der Dicke's political pull and greed for power.

But the Hermann Göring was a whole different critter; a created-from-the-treads-up armored division for the German air force.

And the other odd thing is that, like the paratroopers and very unlike the felddivisionen (which were disasters and probably killed more Germans that their enemies...) the HG turned out to be an excellent combat outfit. Several commentators such as Martin Blumenson have rated it among the best of the German WW2 armored formations. That's pretty high praise, given the competition. 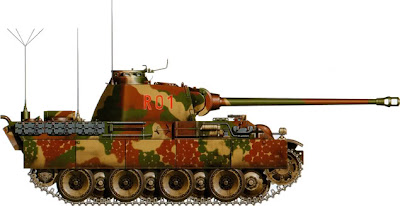 To me, that's just odd. I get it, I understand WHY Fatso wanted one - hard to be a soldier without understanding power bases and military empire-building - but letting him have one?

But perhaps I should be careful about name-calling other militaries; at least the Kriegsmarine resisted the impulse to voluntarily form it's own infantry brigade.