Fallows has been doing some spadework on geopolitics in the South China Sea and the People's Republic of China/Hainan Island People's Congress' latest statements regarding what they see as their rights in the littoral they consider their "near abroad".

And this "abroad" is at least to my eye pretty broad: 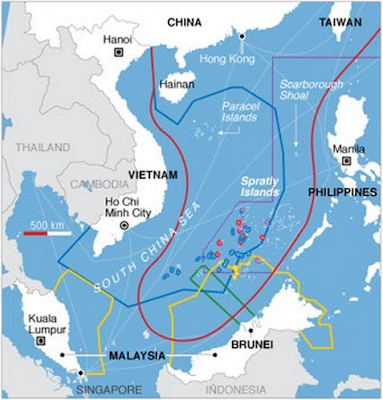 Look at the size of the East-is-Red line on the map above: I don't see any real way that historical claim, international, or maritime law could be twisted to support that reach of "territorial waters". That seems to me to be a hell of an over-reach.

Much as I don't agree with the commonly-heard U.S. conservative trope that places the PRC in the military cross-hairs as "our next enemy" this announcement does seem to me to be an unpleasant sort of geopolitical overreach from the Hainan government and makes me wonder what the hell the PRC was thinking to let this leak out. If "hard cases make bad law" then "making broad statements potentially applicable to nearly-impossible-to-enforce-maritime-territorial-claims makes dangerous foreign policy".

IF taken to the territorial extreme this claim would seem to give any ambitious, aggressive, or just-plain-batshit-crazy PLAN commander a ready made casus belli. 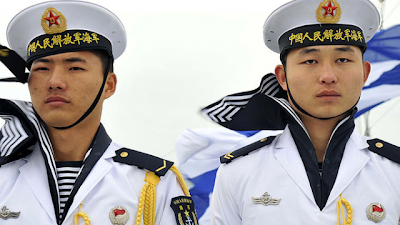 Mind you, there does seem to be a strong strain of opinion that this announcement is NOT intended to genuinely apply to the areas around the Spratley Islands, for example, that while notionally under Hainan Island's "adminstration" are well outside the PRC's 12 or even it's 200-mile limit. The linked article above says conclusively:

"...the actions outlined above are all concern with Chinese territory or territorial waters – not the much larger maritime areas that press accounts have suggested."

In other words, using the map above to conclude that the PRC is saying it has the right to "...inspect, detain or expel foreign ships illegally entering waters..." less than 50 miles off the coast of Brunei, say, would be taking counsel from fear.

But I am watching to see what, if any, further explication of this statement comes from Hainan. Interesting times, perhaps?
Posted by FDChief at 12:41 PM