Brief article in The Diplomat regarding differences between the USN and USAF regarding the employment of their respective forces outside of shooting war. The author's nut graf reads:

"The Navy has devoted substantial intellectual and material energy to developing “smart” and “soft” power tools for engaging with diplomatic partners, and has indeed made such engagement a critical element of its overall approach to maritime security. The Air Force has yet to develop a conception of “soft power” more complex than “friends make the exercise of hard power easier.”

But here's my thought; given the by-its-nature-ephemeral quality of airpower is there really any way for the USAF to develop an approach similar to that of the USN?

An armed vessel, like an armed man may on land, may physically occupy a space of ocean (and from there over the nearby land) and, through its sensors and weaponry, control access to and through that space. It may loiter there for long periods, providing a continuous presence and a potential deterrent to action merely BY that presence. This is, in a very real sense, the essence of "gunboat diplomacy"; the sight and the knowledge of an armed ship presents a dilemma to anyone who might need to dispute with that ship to accomplish their ends, whatever those ends might be.

This is true even if the warship is on a "soft" mission. It's simple physical present is impossible to ignore. What's big, gray, and dominates the harbor? A USN guided missile frigate delivering humanitarian supplies.

An aircraft - by the transitory nature of flight - is less intimidating. It's hard to imagine aircraft enforcing a physical restriction short of actually attacking something on the ground. And many potential recipients of the sort of warning the air assets are meant to convey lack the sensors to track the aircraft when not in sight, so the "gunboat" effect is markedly less.

A C-17 "raisin bomber" is smaller, less imposing, and its presence is easier to overlook. And add to that it is easier to destroy and located in a threat environment less amenable to characterization and control than the sea. So I suspect that the USAF sees a smaller upside and higher downside to such missions than the USN does to its "soft power" cruises.

So I'm not sure that this difference doesn't reflect on a difference in USAF/USN outlook so much as the physical difference between airpower and seapower, a difference that will perforce produce very different ways of thinking about force. 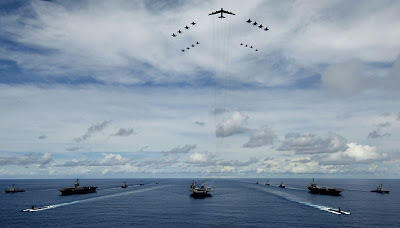 Update 12/6: Sven of the blog Defence & Freedom provides correction to my original post in his comment; "soft power" is supposed to be less about the "gunboat effect" than about using the capabilities of a military force to attract rather than deter people outside the force's own nation, and he provides some good examples.

But I would opine that, again, the nature of airpower still makes this a tricky problem. Warships are complex, expensive, and many nations or peoples don't have the wherewithal to construct or maintain them. So a navy may find that they can provide non-kinetic services to foreign states or groups that those groups both desperately need and can't afford, as well as being a more visible example of soft power and one that is less vulnerable to random threats.

Meanwhile there isn't all that much that a military aircraft can do that a civil one cannot, and the physical fact of flight means that the aircraft tend to come and go rather than loiter making an impression on people. It's the difference between the clouds and the sea; the sea remains, the clouds change, pass over, and are gone.

But Sven's points are good ones. Anyone - Andy, in particular, you are our USAF "insider" - have any insight into why this interservice mismatch?
Posted by FDChief at 9:25 AM