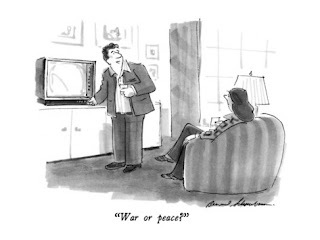 By all that you hold dear on this good earth,
I bid you stand, Men of the West!
--Lord of the Rings, J. R. R. Tolkien

Where you've fallen, you will stay.In the whole universe this oneand only place is the sole place
which you have made your very own

When considering terrorism or the militarization of a society, the American Revolution is a good place to start.

Let us address terms so simple nobody knows what they mean, though they use them like common coin.

In the spectrum of conflict, what is terrorism – a term which should have been defined before basing a worldwide war upon it. What is a “conflict”? Is peacekeeping (PKO) an “act of war”? Is the latter a military or a political action? Both?

Can Counterinsurgency be a conventional war? Does winning hearts and minds have any relevance to the battlefield? Do won hearts translate to positive action? Are hearts as fickle as minds?

If COIN is not a viable mode of warfare, then what is? Is COIN terrorism counteraction? Does a nation invade another in a presumptive strike to avoid a possibility of terrorism emanating from that source? Do such invasions affect hearts and minds negatively? Do invaders ever bring peace? Are invasion and peacekeeping polar opposites, or are they the same?

Is all military power terrorism? Is institutional (governmental) violence more legitimate than non-state use of terror?

Further, are police actions wars? Are they conflicts? Can both sides be right in a war? Are wars ever justified? If so, when? Is there “good” versus “bad” killing? Is assassination an act of war?

Do warriors conduct a legitimate form of violence? Are soldiers warriors? Are warriors covered by the Geneva Conventions? Are terrorists soldiers? Are partisans soldiers? Do partisans use terror as a tactic? Are Hellfire missiles a form of terror?

If the American Revolution was legitimate, then why are not other revolutions? Why does the U.S. support some revolutions, start others via covert operations, and oppose others (sometimes doing all three concurrently)?

Why is a Civil War not right for Iraq and Afghanistan, but it was right for America? Why do we use sneak attacks after fighting a war, especially since we were “sneak-attacked” at Pearl Harbor? Is sneakiness o.k. for our Special Operations?

Are Black Operations legal? Why are they classified?

A few idle thoughts for your consideration.

Posted by rangeragainstwar at 10:26 AM