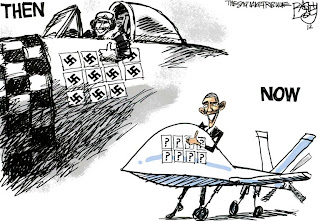 His hope was to remind the world
that fairness, justice, and freedom
are more than words,
they are perspectives
--V is for Vendetta (2005)

It's just murder. All God's creatures do it.
You look in the forests and you see
species killing other species,
our species killing all species including the forest,
and we just call it industry, not murder
--Natural Born Killers (1994)
________________
Commissar Order (Hitler):"As a matter of principle, they will be shot at once, whether captured during operations or otherwise showing resistance."Partisan Order (Field Marshal Keitel):"This fight has nothing to do with the soldierly gallantry or principles of the Geneva Conventions.""If the fight against the partisans in the East as well as the Balkans, is not waged with the most brutal means ..."
________________

Using the "N" word may not be politically-correct, but the President's kill orders are Nazi in origin, concept and execution. Like the Nazi Commissar and Partisan orders, both create a class of persons deemed unfit to live.

In our post-Nuremberg world, war lords like Slobodan Milosevic and

Charles Taylor face imprisonment for their crimes against humanity. Meanwhile, President Obama plays dice with people's lives by conducting extrajudicial killings. It is Ranger's contention that killing one man unjustly is the same as killing six million -- it is simply a matter of magnitude rather than morality.

Murder can only be justified by State action if it has a legitimate end that gains more than than it loses. Slate

magazine today succinctly gives that justification for drone warfare the lie: "The politics of drone war drains the proverbial sea of America’s ideological supporters and undermines the only basis for waging effective war: popular support of the people who feel threatened" (Hatred: What Drones Sow).

The question is a simple one: By what authority, be it legal or moral, may the U.S. President oversee targeted kills? Obviously, as Commander in Chief, he must provide oversight for military killing (= "warfare")

, but Predator marauding is not warfare.

The Central Intelligence Agency is a civilian intelligence agency without a legitimate mandate to kill anyone.

The authority vested in the office of President as C-in-C does not extend to non-military applications of violence.

Further, what is the reason for launching missiles in places like Yemen? Do we believe that the people being vaporized are threats to the national interests of the United States? Have we lost the ability to prioritize threats, and the brain power to realize that near and far threats are not the same thing?

Al Qaeda in Yemen is a a Yemeni and Saudi problem. When did the U.S. become their hired gun? The U.S. is not at war there, and the might and power of the U.S. war-making machine cannot legally be applied to individuals or non-State players. The definition of war precludes the use of State death-dealing.

Hitler's and Keitel's orders were issued during a declared and clearly-defined war. Commissars and partisans were not soldiers, but they were enemy personnel openly carrying arms. These orders were illegal but the intent was based upon military logic, even if a perverted logic. Where does the U.S. logic lie?

Arthur Schlesinger, Jr. reported that President Truman was physically sickened by his decision to bomb Hiroshima and Nagasaki. However, by making the decision Truman was acting within his authority during a general war scenario. Truman was also a World War I artilleryman and familiar with death in an up-close and personal way; his decisions were presumably not made blithely.

In a democracy we need civilian leaders with humanity at their core, rather than the coolness of a mafia don. We fete Obama's detached coolness when he nods his head sanctioning another official murder, but do not question how Obama's actions are different from those of Hitler. How different from war lords Milosevic, or Taylor?

How did men like Cheney, George W. Bush, Obama and Romney gain their lust for killing? What is my role in this deadly drama, as my tax dollars help pay for the missiles that rein death from the skies?

When Hellfire missiles become the symbol of America, and when our Democratic party leaders embrace assassination, then where are we as a nation? Why are we o.k. with our leaders acting like the Partisan Order is the standard operating procedure for our nation?
When neither political party will demand Enlightenment values, then we are walled up in a town called Nuremberg.

Posted by rangeragainstwar at 9:06 AM