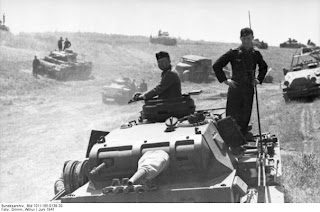 Seventy years ago today the massive encirclement operation known as the battle of Kiev was declared over by the German High Command. The success was deemed the greatest defeat of its kind in history with the Wehrmacht taking 665,000 Red Army prisoners, although Soviet sources give a smaller number. The Deutschewochenschau number 577 of 24 September 1941 opened with a dedication to Generaloberst Ritter von Schobert - commander of the 11th Army - who had died a "hero's death" (den Heldentod fand) when his reconnaissance plane landed in a Soviet minefield earlier that same month. The music playing in the background to the report provides an example of the attitude the Nazis had towards sacrifice at this point in the war. It was assumed that there would be significant losses given the stakes involved and the willingness to self-sacrifice (Opferbereitschaft) of the soldiers from the highest to the lowest ranks was expected since the decisions made and the successes achieved would mark the next phase/epoch of not only the history of Germany, but the entire world. Through this unprecedented level of destruction, the participants in this crusade were in effect making a new world.

The Kiev operation is interesting for several reasons in addition to its very scale. For maps look here for detailed maps and here for a general map.

Stalin had thought an offensive at this late date in the season would not come in the south, but towards Moscow, which he knew from his spies in Berlin and elsewhere was the prime German goal. General Zhukov was in fact sacked for suggesting that Kiev would have to be surrendered. At the end of July with the German Army Group Center stalled to the front of Smolensk, Zhukov saw the threat to the south and recommended a retreat across the Dnepr. Stalin took this as a challenge to his strategic leadership and had Zhukov replaced with Marshall B.M. Shaposhnikov whom Stalin considered politically reliable and unlikely to disagree with his views. Zhukov was given command of the Reserve Front facing the German bridgehead at Yelnia to the front of Moscow, where his successes there were to pay later dividends.

So, first we have the unwillingness of the Soviets to retreat, but if the main goal was Moscow, why turn half the Panzer strength of Army Group Center south into the Ukraine instead of northeast towards Moscow? Why was there this diversion of strength which allowed for the massive encirclement of the Kiev pocket?

To answer that question we need to go back to the planning stages for the campaign which had started at the end of 1940. A series of competing plans were drawn up, and while there was general agreement as to the main emphasis on Moscow, there were those who felt that either Leningrad in the north, or the Ukraine should be secured first. Hitler's own variant envisioned a flank strategy focused on Leningrad. In December 1940, a General Staff Kriegsspiel or war-game was conducted by General von Paulus (who would later go into captivity with the remnants of his 6th Army at Stalingrad). The results were quite interesting and contrary to the very optimistic projections coming from the Army High Command (OKH), the Wehrmacht High Command (OKW) and the Luftwaffe (OKL).

Based on his war-game, Paulus concluded that: First, the resources at German disposal were barely enough to advance to Moscow and reaching the Archangel-Volga River line were beyond their capabilities. Second the spaces and time involved did not allow for the Blitzkrieg approach which had been used effectively against both Poland and France. The Panzers could advance, but at such a speed that the following infantry would be left far behind. Also the Luftwaffe would not be able to displace forward as quickly as in the past leaving the Panzers with limited air support the further they advanced. Third and finally, supply would be difficult once the advance got beyond the Dnepr-Dvina line. Constructing new supply areas, relaying European gauge rail lines not to mention repairing what had been destroyed would take months. It should be noted that the war-games included certain optimistic assumptions some of which later proved unfounded. The Germans assumed superiority in tanks, artillery, signals equipment and aircraft, and assumed that their infantry divisions enjoyed a 1/3 superiority in terms of heavy weapons over Soviet infantry division equivalents.

In spite of the war-game's conclusions, General Halder of the OKH believed the fighting quality of the Red Army to be so low, that he assumed that the campaign would be over by the onset of winter. At the same time Halder was focused on Moscow as the main aim of the campaign and thought it possible to capture the capitol during the 1941 campaign.

The OKW under General Jodl were convinced of the importance of Moscow, but thought that the northern flank, the area between Leningrad and Moscow would have to be cleared before an advance on Moscow could commence. Halder was able to convince Jodl of the soundness of his views, but given the influence of Hermann Göring and the Luftwaffe who were pressuring Hitler to capture the Ukraine and the Crimea as well, Halder was having difficulties. Success it seemed had made far too much possible, that is assuming that the Red Army was on the edge of collapse . . .

Reichsmarschall Göring is seen today as simply a drug-addicted buffoon, but in 1941 he enjoyed a relatively high level of prestige in the Nazi hierarchy. It is interesting to note that in the Wochenschau edition linked above, he receives a prominent place in the presentation. In the summer of 1941 Göring was seen as an expert in Blitzkrieg warfare, due to the Luftwaffe component of the system, and considered by many to have a better grasp of the subject than the reactionary generals like Halder of the General Staff.

Thus we see Göring, not Halder or even Jodl, playing a key role in strategic direction in the summer of 1941. It was also at this time that he promised Hitler that the Luftwaffe would be able to "destroy Leningrad from the air". So it became policy with a memo issued by Hitler on 22 August. This is important to note: As the Panzers were moving south towards Kiev, the Luftwaffe was moving north to support Army Group North's attack on Leningrad.

The final indignity for Halder was performed by General Guderian, who in a private discussion with Hitler on 23 August confirmed that Moscow should be the main goal, but that also he be allowed to retain control of his entire 2nd Panzer Group for the Kiev operation. Guderian advanced due south to close the pocket with the 1st Panzer Group advancing north. Thus Guderian retained control of his formation, but this allowed Zhukov to grind up a German Army Corps at Yelnia, which would have could have been better used on the later advance on Moscow.

Kiev was a great victory, which opened the door to the Ukraine, but it also saved Moscow since the Germans would be unable to shift the 2nd Panzer Group north in time, not to mention the losses/wear and tear which could not be replaced. Instead of smashing the forces to the immediate front of Army Group Center with a fall offensive and then digging in for the winter, the Germans risked it all to take Moscow as the weather turned cold, with an army that had been equipped to win before the snows fell . . .
Posted by seydlitz89 at 6:10 AM