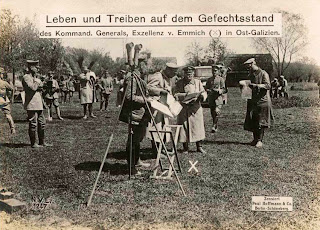 As to Al Qaida, it seems obvious to me that we have to rethink our assumptions on that one. My comment as to "resuscitation" saw AQ as providing a useful prop for US policy, linking AQ/Islamofabulism with the Arab Spring would be in the best interests of the Washington Rules and of course our (remaining) autocratic proxies in the ME. To this we must now add the reality - which is hard to dispute imo - that AQ/OBL was essentially a state-sponsored entity. OBL would have never lasted as long as he did nor would have felt as secure as he obviously did were that not the case. The open question at this point is which other states, besides Pakistan, were its sponsers . . . ?

Now a metaphor . . . consider a Prussian Army Corps Headquarters circa 1916 in Russia - officers and staff non-commissioned officers roaming about on an open field. Suddenly KA-BOOOOOM!

Dazed faces, smoke, men stumbling about, nobody's hurt but everyone's a bit singed ... what happened? One of our basic assumptions about the current complexus of US military conflicts essentially imploded. OBL/Al Qaida was state-sponsored, probably all along, which is why it has lasted as long as it has, was able to be so quickly resuscitated after the advent of the Arab Spring.

The first question is since OBL/Al Qaida is a state-sponsored entity, which countries are behind Al Qaida in addition to Pakistan? This one is followed by countless more . . . We are in a new war from a Clausewitzian strategic theory perspective . . .

One of the basic assumptions of the Global War on Terror is gone. Any person wishing to seriously discuss strategy, strategic theory, or our own US military history since 2001, will have to deal with that fact, from now on.

Some more possible pieces have been added to the puzzle which support my view.

FB Ali of SST has an interesting piece up which starts with this scenario:

It begins with the CIA station chief in one of the Gulf states receiving an unexpected visitor with a fascinating tale. He was a recently retired senior officer of Pakistan’s intelligence agency, the ISI, and he wanted to talk about Osama bin Laden. Some years ago, he said, the Saudi intelligence chief approached the ISI with the request to provide sanctuary to bin Laden within Pakistan. The Saudis said that bin Laden was prepared to come down from the hills where he was hiding, provided sufficient assurances were available about his security. In return, he would ensure that al Qaeda would not target Pakistan, and he would also limit his own involvement in its operations. . .