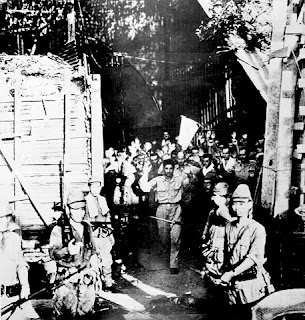 --Corregidor
I knew a simple soldier boy
Who grinned at life in empty joy,
Slept soundly through the lonesome dark,
And whistled early with the lark.

In winter trenches, cowed and glum,
With crumps and lice and lack of rum,
He put a bullet through his brain.
No one spoke of him again.

You snug-faced crowds with kindling eye
Who cheer when soldier lads march by,
Sneak home and pray you'll never know
The hell where youth and laughter go
--Suicide in the Trenches, Sigfried Sassoon

I woke up this morning,
and I just hated everything!
--Lara Croft: Tomb Raider (2001)
__________________
Another Memorial Day and another big picnic and day of shopping. But everyone -- both those who carried the burden and those who didn't -- should humbly and reverentially consider what underlies the day of leisure for so many.

It is difficult to discuss Memorial Day without discussing living veterans. Veterans Day and Memorial day are two sides of the same coin; the continuum is brief, and we the living march to death much too quickly. It is but one breath or one bullet that separates the two.

All who served, whether volunteer or inductee, made the conscious decision to go forward and do what was required. Some of us were hurt or wounded, but all dedicated precious days in our young lives to a cause larger than ourselves. All of us relinquished our individual concerns to the greater good, which we believed was our duty as responsible citizens. We recognized that the rights of a free society were insured by the obligations of harsh duties.

Soldiers were not all born in the U.S.A. When speaking of immigrants today we forget that it was they who often carried America's wars. These immigrants, tempered by war, earned their rights to be called Americans, as was the case in Ranger's family.

As 1st and 2nd generation Americans, both Ranger's father and he served in wartime uniformed service, as did several of his cousins. (Ditto for male members of Lisa's maternal family.) However, the present generation has seen fit not to serve, as the draft has not compelled them to do so. Neither of my nephews wore a uniform, though both of their fathers did. This is a common pattern now since we are content to say we have a professional class of warriors and service can be passed by as something someone else will do.

It is our national shame that we men have also passed this obligation onto a female class of warriorettes, calling it business as usual. Contrary to the official p.c. version, combat is no place for a woman since they are incapable of the extreme hardships of the physical reality of ground combat. We accept women because we have not fought a real war since Vietnam, and what we now call combat is naught but a shadow of the reality.

Can anyone envision women in the defense of Corregidor, or on the Bataan Death March? What about the Battle of the Bulge or storming the heights of Pointe du Hoc? How about the retrograde from the Chosin Reservoir? So why do we persist in the fiction that we can function as a combat entity? This is nothing but an official snow job. It's Ranger-simple: Defending the U.S. in combat is a man's job, despite any Lara Croftian hype to the contrary.

Ranger is thankful his fate never took him on a death march, before a wave of human attacks or to combat in frozen countries. The courage of those that carried those actions was so daunting that it is difficult to even weigh one's more recent service against the gravity of their campaigns.

It is unimaginable the indignities and sacrifices of our former POW's or the desperation of their service in far-flung battlefields. Whether opposed to or favorable towards our present wars, we must humbly bow our heads for those that have passed before in the inexorable march of history.

The survival of the U.S. has been carried on the backs of Soldiers, Marines, Airmen and Sailors. Hopefully some day war will be a memory of a fighterly species evolved.