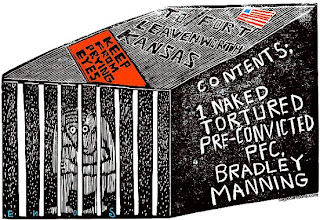 When the people are being beaten
with a stick, they are not much happier
if it is called "the People's Stick
--Statism and Anarchy (1873) Bakunin

And if you can take a man's life
for the thoughts that's in his head
Then won't you sit back in that chair
and think it over judge one more time
--Johnny 99, Bruce Springsteen

Are you gonna pull those pistols
or whistle Dixie?
--Outlaw Josie Wales (1976)
__________________
Why is Bradley Manning being held in punitive and vengeful Federal custody? What is his crime, or alleged crime?

It cannot be espionage or treason. It is even hard to call it spying, so what is it, exactly? If Manning is such a threat, why hasn't WikiLeaks, founder Julian Assange or anyone else associated with this incident been indicted as co-conspirators? Why is Manning the only one in Federal prison? Why were none of his superiors charged with failure to secure classified data?

Manning was recently transferred to Ft. Leavenworth Correctional Facility, a Federal prison. Not only was Manning held in isolation for five months in the Marine Corps brig in Quantico where he was subjected to possible human rights violations and certainly held without recourse to a speedy trial, he is now being imprisoned without having been adjudicated guilty by any court, not even a kangaroo one.

Why this pre-trail confinement, which appears as open-ended as the Middle East campaigns? Further, why hasn't Manning's legal team filed a writ of habeas corpus? Manning's condition is similar to that of the Guantanamo Bay detainees -- try them or release them; there is no middle ground. Manning is a U.S. citizen, and if he can be jacked around by the legal system, so too can anyone.

We owe to the rule of law to try Manning or release him -- if murderers can get a speedy trial, so can Manning. Our system of jurisprudence demands this small token of respect for U.S. legal thought, traditions and practice.
Posted by rangeragainstwar at 2:38 PM