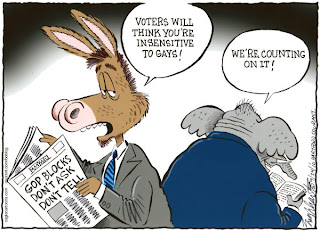 We hold these truths to be self-evident --
that ALL men are created EQUAL
--U.S. Constitution
___________________
"Needs of military take precedence over liberal social engineering" was a recent USA Today op-ed by Marine Corps veteran Tony Perkins arguing against the repeal of the military's "Don't Ask, Don't Tell" policy (DADT).

Every one of Mr. Perkins' assertions was deserving of refutation, and away we go:

The military has long been a site of social engineering. Testing -- vocational and psychological -- began in WW I; racial integration of non-segregated combat units began post-WW II. The current Volunteer Army (VOLAR) is also a form of social engineering by virtue of creating a separate military caste (versus the previous draft army.)


[2] "A soldier must represent his or her country and maintain military discipline 24 hours a day, seven days a week. This is why sexual behaviors such as adultery and sodomy remain crimes under military law."

If we are so moral, why are illegitimate offspring of service members now afforded coverage under the Tricare system? Is this sanctioning of fornication any less of an offense to order, discipline and soldierly conduct? To equate adultery to sodomy to unsoldierly conduct is hypocritical.


[3] "To put people with sexual attractions to one another into conditions of forced intimacy — sharing bathrooms, showers and sleeping quarters — runs the risk of increasing sexual tension, harassment and even assault. These are clear threats to good order, morale and unit cohesion."

But "people with sexual attractions" are already in proximity -- they are called "men and women". Mr. Perkins is carrying on the libel that homosexuals are predatory and not in control of their libido. His illogic is revealed if one replaces gay male soldiers with female homosexual soldiers, or heterosexuals of either gender.

Is Perkins presuming men are strong enough to be soldiers, but not strong enough to fend off unwanted advances? Or that homosexuals are not regimented enough to curb their libidinous drives? He is condemning them a priori. It is the Mandingo fantasy in its 2010 update.


[4] "There is no constitutional right to serve in the military, and individuals are routinely denied enlistment on the basis of characteristics that would rarely, if ever, be the basis for exclusion from civilian employment. These include height, weight, family responsibilities, or even relatively minor health conditions such as asthma."

Homosexuality is not a pathology. It is a gender orientation which has no bearing on the individual's ability to perform a task. It does not prevent the service member from executing duties faithfully. (As an aside, the first U.S. military service member wounded in the Iraq Occupation was Marine Staff Sergeant Eric Fidelis Alva, who lost his leg to an IED. Staff Sgt. Alva is homosexual.)

[5] "Polls showing support for homosexuals in the military have been distorted by biased wording."

Opinions are irrespective of the Constitution. We have all become such slaves to the talking heads and the pollsters, but their views or results are irrelevant to the topic. Polls do not trump the Constitution, which guarantees equal protection of all.


[6] "Only one in eight of the world's countries allow homosexuals in their armed forces. The 10 largest military forces all exclude homosexuals."

Irrelevant. We are our own example, and lead by American exceptionalism. It would be more relevant to look at our NATO allies. Nations like Afghanistan are filled with good family men who keep personal dancing boys for their pleasure. (But they are not gay, you see, because they do not love the boys.)

If you prohibit homosexuals from the military, not only do you indulge in affirmative action bias, you do not remove the scourge of rape and sexual abuse which is rampant among hetero service members.


[7] "The needs of the military must come before the demands of radical social activists."

Au contraire. The needs of the nation precede those of the military. We are not a military dictatorship.

One wonders if Mr. Perkins has ever known or had any interaction with a homosexual. Surely he acknowledges that a percentage of our population is homosexual, and phony arguments cannot change that fact or marginalize these people.

His arguments are lacking in Christian compassion and understanding, qualities which should not go missing in a man who is the leader of the Family Research Council.