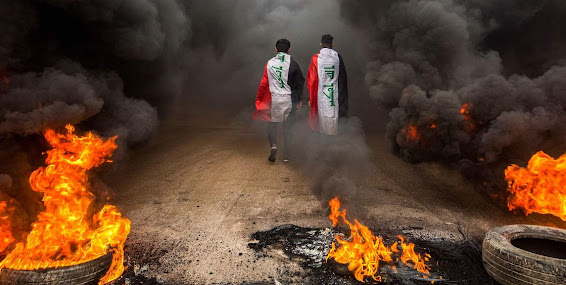 The U.S. Congress has, in the usual scatterbrained and dysfunctional way that body seems to work, taken up the issue of repealing the 2002 "Authorization to Use Military Force" that was the legal cover for the 2003 invasion of Iraq and the mess-o-potamia that followed.

I trust that no one who regularly visits this place has forgotten the appalling clusterfuck that resulted from that cynical bit of Great Power stupidity, so it's obvious on its face that it is time and past time to flush the boneheaded and dangerous thing, full of more lies than nuts in a fruitcake, and I wish they'd 86 the 2001. 9/11, version while they're at it.

The notion of having a political rule just lying around that provides any U.S. government who wishes the "legal" authority to start throwing projectiles around the globe seems dangerously stupid. It's not like illegality will stop a cabal that wishes to do that, but to give them a sort of real-life "C'est par mon ordre et pour le bien de l'Etat que le porteur du present a fait ce qu'il a fait."?

Both of the 2000's AUMFs are Bad Ideas spawned by my country's weird and ugly combination of geopolitical hubris and laziness, the sort of mindless aggressive response to any sort of provocation that makes every problem a nail to be militarily hammered.

It's unfortunate that the mindset that produced them cannot also be repealed. But at the very least - given the lessons that the mindless ruin and merciless hatred that the two have spawned should have taught us - these two loaded guns need to be unloaded.

We'll see if there's enough political sanity left in the U.S. capitol to do that.