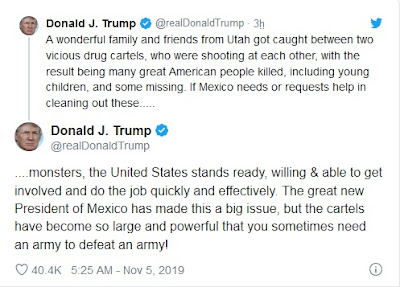 This Administration is not going to have the mental throw-weight to recall the last time that GIs went across the southern border chasing bandits who killed American citizens, but that doesn't mean we all have to be that stupid. Hell, it was barely a century ago. But the poisons that infused still haven't leached out.

And this is, again, a reminder that the whole "Donald the Dove" thing is utter bullshit. The guy is a blowhard and a bully, and like all such, loves the idea of you and him fighting, so long as HE doesn't have to get his implants mussed. Trump will send GIs into harm's way whenever he sees some sort of transactional benefit for himself, whether it's emotional (waxing some of the darkies he hates) or financial (selling mercs to the Saudis) or political (getting his MAGAts swwoning over his manly manliness).

Nothing will come of this, of course, but only because the Mexican government isn't as stupid as he is and won't take him up on it.
Posted by FDChief at 9:40 AM