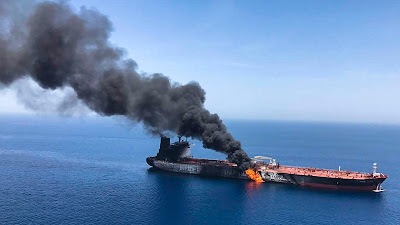 It may very well be possible that Iranian assets are striking oil tankers in the Gulf of Oman.

It is definitely likely that the Trump Administration would lie about whether that is possible or probable, or both, or neither.

That's the drawback of letting your system foist an incorrigible liar and a coterie of New Gilded Age grifters into the highest executive offices; you then don't know whether you can trust them not to lie you into a shooting war.

If the administrations of Kennedy and Johnson - that were staffed with genuinely intelligent and experienced foreign policy players - lied us into Vietnam, and the Lesser Bush administration - that was crock-full of wingnuts, imperial fantasists, outright kooks, as well as the Stupidest Man on the Face of the Earth - lied us into Iraq, I sure as hell don't trust THESE gomers not to lie us into some sort of idiotic whack-a-Persian blood hunt based on some sort of moron idea that it'd take normal humans smoking a full ounce of prime weed then drinking two cans of sterno and a half-rack of Old English 800 to come up with.

I sure as hell hope the rest of my countrymen aren't stupid enough to let the Trumpkins play this game.

Update 6/14: The lies have already begun:

"The Japanese owner of the Kokuka Courageous, one of two oil tankers targeted near the Strait of Hormuz, said Friday that sailors on board saw "flying objects" just before it was hit, suggesting the vessel wasn't damaged by mines. That account contradicts what the U.S. military said as it released a video Friday it said shows Iranian forces removing an unexploded limpet mine from one of the two ships that were hit. Company president Yutaka Katada said Friday he believes the flying objects seen by the sailors could have been bullets. He denied any possibility of mines or torpedoes because the damage was above the ship's waterline. He called reports of a mine attack "false."

As Sven points out in the comments, The U.S. hasn't been an honest player in the field of foreign policy for a long time, and this administration is a more prolific and consistent liar than most of the previous ones.

IMO this is a patently crude attempt between the Trumpkins and their Saudi pals to gin up a casus belli. If the US public and Congress falls for it, well, as a well-known foreign policy expert once said: "Fool me once, shame on you. Fool me twice...won't get fooled again!"

And Jim Wright, as he often does, is asking the question that EVERY news agency should be asking: "Cui bono?".

Who would benefit from a US-Iran dustup? Especially one that would, as it inevitably would, raise the price of petroleum? 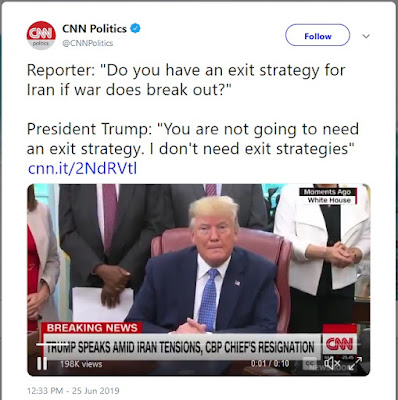 "Strategy? I don't need no steenkin' strategy? I have guns! I take YOUR strategy!"

What a fucking maroon.