Oliver Bullough, the British author of "Moneyland"  (a good read) and several books on modern Russia, tweets the story of his uncle on D-Day landing on a beach defended by Ukrainians.  Who all immediately surrendered. 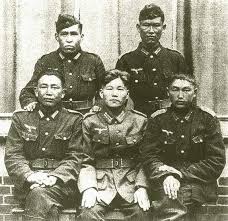 There were many others like them at beaches and ports in northern & southern France, and the Netherlands & Belgium.  Some were rear area security, some anti-partisan, some supervised forced-labor, some were in engineer units, some others were in Luftwaffe AAA units, and some were even incorporated into Heer infantry units.  They consisted of Armenians, Azerbaijanis, Cossacks, Turkestanis, Tartars, Turkmen, Uzbeks, Kazakhs, Daghestanis, Chechens, ethnic Russians of Vlasov's Corps, and a few Japanese & Koreans.  And that doesn't count the many Europeans in SS units.

Some capitulated forthwith like Bullough's Ukrainians.  Some others were hardcore and fought bitterly as they feared a death sentence if returned to Stalin.