99 years ago on 1 November 1919 Britain established GCHQ, the 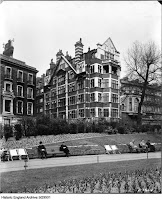 'Government Communications Headquarters' that provided SIGINT and crypto protection for the armed forces plus diplomats and spies of the UK. Prior to that each service had their own SIGINT & Crypto silos, MI-1 for the British Army and Room-40 for the Royal Navy.  Picture on the right is the first home of the British GCHQ, it was known as Watergate House.

The British centralization of SIGINT and Crypto preceded the American effort to do the same by at least 30 years.  The US founded AFSA, the 'Armed Forces Security Agency' in 1949.  But that effort was never completely centralized as there were several exceptions within plankholder Army and Navy intel units, plus it never coordinated with civilian agencies such as the State Department, the CIA, and the FBI.  So it took another three years before the NSA, also known as 'No Such Agency', was formed.  In my opinion one thing the Brits did very much better than the US was that they placed GCHQ under their Foreign Secretary, while we poor cousins still have the NSA as part of DoD.

During WW2 GCHQ was moved out of London into Bletchley Park about 70 kilometers NW of London in Buckinghamshire. Made famous by many books and movies it is now a museum open to the public.  You can spend the day gazing at an 'Enigma', or the Turing/Welchman 'Bombe' machine. Perhaps even 'Colossus', the world's first electronic, programmable digital computer, that broke the Lorenz cipher and was reading orders to the field from OKW and sometimes Adolf himself.
https://bletchleypark.org.uk/

Nowadays GCHQ is based in the Doughnut in suburban Cheltenham in Gloucestershire.  5800(?) employees compared to 30 to 40000 for NSA; and they have only a fraction of NSA's budget.  But they reportedly still do a decent job - specialization by the crafty Sassenach boffins I assume.  Plus they have much closer relationships to similar intel organizations in former commonwealth countries.  I don't believe they'll let you visit though. 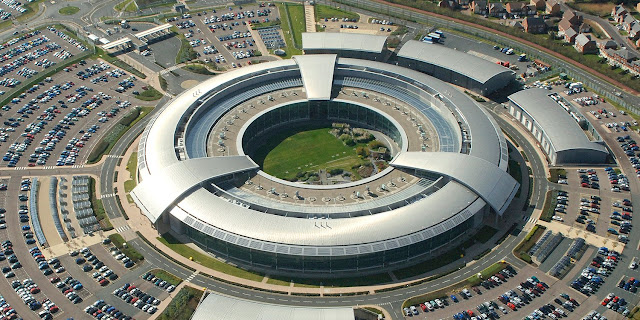 Director since March 2017 is Jeremy Fleming formerly of MI-5, the US semi-equivalent of the FBI.
https://www.dailymail.co.uk/news/article-4332290/What-know-Britain-s-new-chief-spy.html
Director Fleming denied strongly the spurious allegation by Fox News and later by Trumpy himself  that GCHQ spied on Trump Tower for President Obama.
Posted by mike at 10:58 PM